By Noah Sheidlower and Radhika Marya

(CNN) Leonardo Nourafchan wanted to do something different. After trying out jobs in real estate, the California native knew he wanted to break into the food industry, starting with catering from his home and creating blogs.

He worked long hours in the kitchens of New York restaurants, including Mike's Bistro and Alenbi, then finally opened his Israeli restaurant Charcoal Grill & Bar in Los Angeles.Nourafchan snuck Mexican-influenced dishes -- inspired by the area's culinary scene -- onto his kosher menu. These included lamb shawarma tacos, which he said were incredibly popular. The restaurant shut down at the beginning of the pandemic, but by May 2020, Nourafchan was testing a new kosher Mexicali concept out of his former meat supplier's kitchen. Lenny's Casita, a kosher Mexican restaurant, officially launched in July 2021."It's kind of like a cross between a kosher Chipotle and Taco Bell, which are the things that I used to eat as a kid," Nourafchan told CNN.Read MoreNourafchan said his street food-inspired menu -- which boasts carne asado tacos with pico de gallo, chipotle honey wings and Mediterranean pitas called arayis -- is part of a larger "kosher food revolution" happening nationwide. In cities such as New York, Chicago, Miami and Baltimore, restaurants are redefining both kosher and Jewish food more than ever, pulling from traditionally non-kosher cuisines such as Chinese, Japanese, French and Italian. 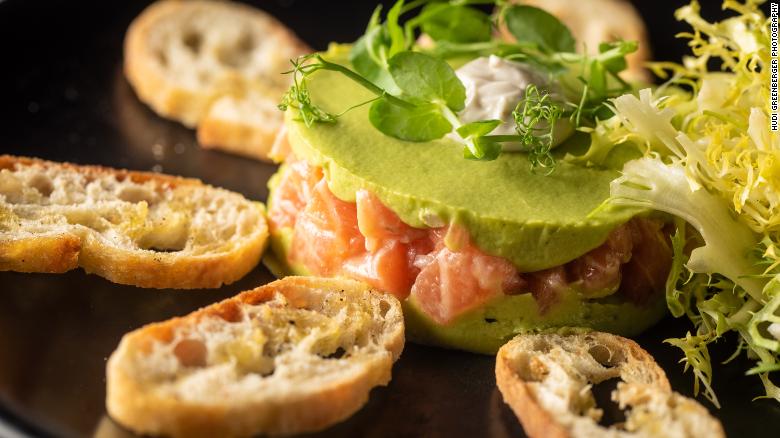 Salmon tartare from Barnea Bistro in New York.These kosher restaurants are attracting more than just Orthodox Jews -- the kosher restaurant owners CNN spoke to noted that a large part of their clientele are younger non-Jews looking to try innovative dishes.
"Whereas before you had gefilte and cholent and your kosher deli, now you're getting a whole range of cuisines," Nourafchan said, adding that many previously non-kosher chefs are adding their multicultural spin on kosher cooking."People are willing to value and appreciate traditional, authentic new food in a way that I don't think kosher Jews were interested in, in the past," he said. "All that combines together to support a market that's allowing creative people like me to do my stuff."

Kosher food has become significantly more accessible over the past decade, according to Elan Kornblum, president of Great Kosher Restaurants Magazine, who runs a popular Facebook group about kosher restaurants. He attributes this to social media that has presented kosher cooking as healthier and cleaner, the growing creativity of kosher chefs, and increased accessibility of kosher ingredients.Today, there are over a million ingredients that are certified kosher by many agencies, according to Roger Horowitz, author of "Kosher USA." At supermarkets, 30% to 40% of items are kosher-certified, Horowitz said. Many Orthodox rabbinical organizations have embedded kosher requirements into food manufacturing, incorporating modern science into centuries-old Jewish law.Kosher laws state that dairy cannot be eaten within six hours of meat. Land animals must chew their cud and have cloven hooves, according to the Torah, which disallows pork and rabbit. Fish must have fins and scales, including tuna, salmon and sea bass.Horowitz told CNN that as many Jews arrived to the US in the early 1900s, the integration of kosher food guidelines became a measure of their acceptance into American society, where Jewish dietary codes were at odds with predominantly Christian culinary traditions. The incorporation of kosher requirements into food manufacturing and supply chains has made it possible for many ingredients to be kosher-certified, especially those not traditionally associated with Jewish food.The certification of kosher meat was particularly challenging, according to Horowitz. While meats like pork are out of the question, there are many requirements for how poultry must be killed, which differ from processing procedures followed by mass producers. Beef is a "greater problem" because Jewish law prohibits the consumption of blood once the animal has been killed, so only the forequarters are permitted. The small number of kosher beef manufacturing centers has contributed to much higher prices for kosher beef than non-kosher beef."By and large kosher certified spaghetti sauce, take that example, there is no price difference from the non-kosher spaghetti sauce," Horowitz said. "Instead, in the meat area, you're paying a penalty, a surcharge for the Jewish religious requirements." 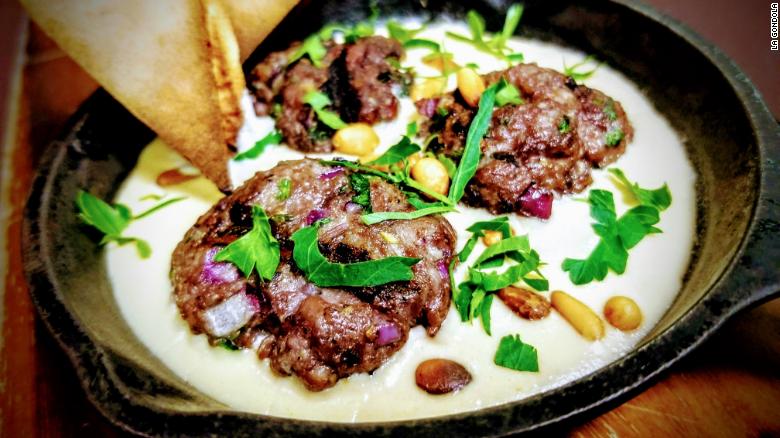 La Gondola is a meat-based kosher Italian restaurant in Beverly Hills.Some kosher products like Manischewitz wine were instrumental in winning over non-Jewish consumers. Others like Jell-O had long and contentious journeys to become kosher. Horowitz noted that glycerin, an ingredient found in everything from soft drinks to ice cream, was originally considered non-kosher because it was a byproduct of soap manufacturing and a product of animal fats. Because of scientific developments, glycerin from vegetable oil or petroleum is kosher, and Coca-Cola and other products could be certified.Kosher food options have expanded at relatively marginal cost increases because of advances in manufacturing, which make it easier to detect if ingredients are contaminant-free. The scope of what is considered "Jewish food" has grown beyond just Ashkenazi cooking from Eastern Europe to "reflect the diversity of Jews and the range of Jews who probably eat French food or Italian food daily," Horowitz said.

The difficulties in operating a kosher restaurant

Many innovative and culturally diverse kosher restaurants have opened this year across the US. Although these restaurants expose many diners to previously unfamiliar dishes or styles of cooking, this experimentation comes with some risks and costs, according to a few owners.Bryan Gryka is the principal owner and executive chef of Milt's BBQ for the Perplexed in Chicago, with many dishes inspired by Gryka's upbringing in Arkansas. The menu includes options such as a 16-hour smoked brisket sandwich, "Noshville" hot chicken and applewood-smoked half chicken. Because of high kosher meat costs, which have shot up during the pandemic, menu prices have increased as well.Gryka took to social media to explain exactly how prices break down to make numbers more transparent. He has also posted about why restaurants use, for example, frozen French fries, or why they implement charges for cancellation.For certified kosher restaurants, frequent closures on Friday nights and Saturdays for Shabbat -- as well as on all Jewish holidays -- can amount to major revenue losses. Milt's is closed about 100 days per year, according to Gryka, making it harder to compete with others that are open all year.
"We do a lot of catering and events, and in terms of economics, it's a huge reason we've been successful, the ability to be able to do stuff outside of our four walls, because a lot of places if you don't have the catering, it's so limited the ways you can survive and be somewhat profitable," Gryka said.Soho Asian Bar and Grill, a contemporary Chinese- and Japanese-inspired eatery in Aventura, Florida, loses about 80 days out of the year. But according to owner Shlomi Ezra, having such a large menu at the "one-stop shop" -- featuring sushi, dim sum, noodle dishes, and steaks -- allows Soho to cater to a large kosher crowd that is largely unfamiliar with Asian flavors. Soho's commitment to serving everyone in the community, including those affected by the Surfside condo collapse last summer, has also helped because it attracts a large non-kosher crowd."I don't see any difference between a regular restaurant and a kosher restaurant," Ezra told CNN. "The restaurant has to be good, the service needs to be good, the food has to be on point so people don't forget you."

What restaurants are doing to 'kosherify' different cuisines

Josh Kessler worked primarily in non-kosher restaurants around New York City after graduating from the Culinary Institute of America. But he decided to pull from his experiences in French cooking to open a kosher bistro that "could hold up to any of the other non-kosher restaurants that I've worked in my career."At Barnea Bistro, Kessler is cooking up dishes such as beef tartare, Hamachi crudo, lamb riblets and duck breast with wild mushroom risotto, in addition to Italian-inspired entrees like black truffle ravioli and short rib gnocchi. Kessler uses cashews as a dairy replacement and pulls from vegan cooking techniques for dishes like polenta fries with truffle honey. He drew from French techniques for his menu because he noticed that more kosher Jews are willing to step out of their comfort zones and experience new flavor profiles. 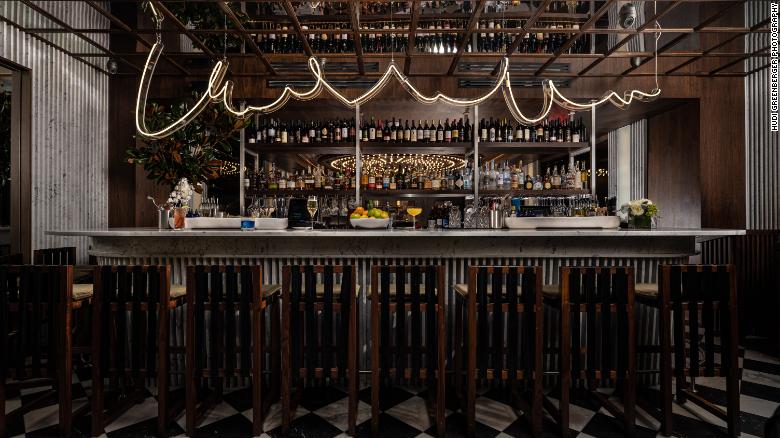 Barnea Bistro is an upscale French-inspired kosher restaurant in New York."Whether it's video, whether it's pictures, or whether it's the Food Network or the Cooking Channel, [kosher Jews] are exposed... to what the rest of the world is eating, and it happens to be that kosher people want an opportunity to be progressive in that way and get at least an exposure in the best way that they can to those different types of world cuisines," Kessler said.This was one of the goals of Nir Weinblut, who is of Turkish and Italian heritage and is the owner of kosher Italian restaurant La Gondola in Beverly Hills. As one of Los Angeles' first Italian kosher restaurants -- opened in 1992 -- La Gondola over the years has pulled from Asian, Mediterranean and California cuisines, creating dishes such as candied beef bacon, penne al arrabiata, jambalaya pasta and pastramied salmon. "Our objective was to take out all the cheese, and we did not want to do any substitutes because there's no way in the world, especially back then, to be able to make fake a fettuccine alfredo if you have such bad substitutes," Weinblut said.In studying his heritage, Weinblut found that Italian cooking does not use as much cheese as most would think -- "when you think Italian, you think everything has five pounds of mozzarella thrown on the food." Instead, he relied more on vegetables and fruit while thinking up dishes. 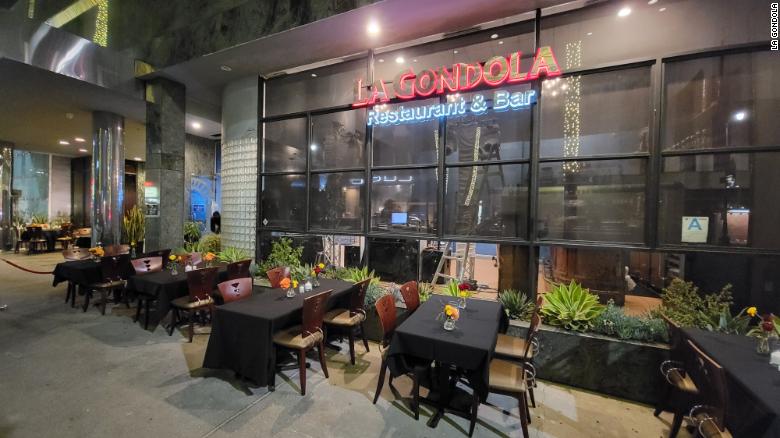 La Gondola is a kosher Italian restaurant in Beverly Hills that has been open for almost 30 years.This still required some creative solutions. For instance, because kosher supervision does not allow chefs to use entire artichokes due to the number of bugs in the heart, La Gondola improvised to use just artichoke bottoms.Weinblut told CNN that because he chooses not to present La Gondola as kosher first, lunch clientele has been about 80% non-kosher. He sees La Gondola as one of the leaders in Los Angeles' "kosher revolution." 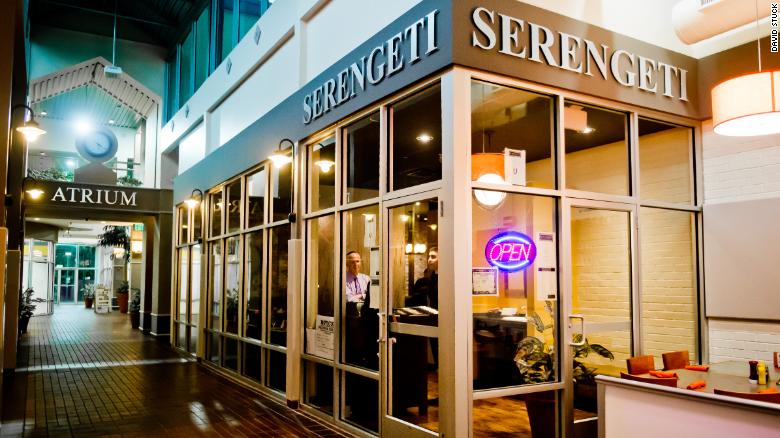 Serengeti Restaurant in Baltimore draws from African flavors.At Serengeti in Baltimore, a kosher steakhouse that blends Southern and ethnic African flavors, showcasing the possibilities of kosher cooking could not be more important, according to co-owner Lara Franks. Born and raised in South Africa, Franks and her husband Larry wanted to capture the complexities of South African foodways in a kosher restaurant setting. They pull from Dutch, Malaysian, Portuguese, and Indigenous recipes for dishes like Cape Malay vegetable samosas, Mozambique-inspired Peri Peri chicken, Cape Town chicken breast biryani and South African bobotie."There's no need to feel that if you keep kosher, you should automatically feel that you are somehow hardened or disadvantaged because you can't fully experience a particular dish or kinds of cuisine," Franks said. "Almost anything can have a kosher translation."

Most Popular This Week
1
The best vegan foods to try at Dubai's Expo ...
2
12 celebs on going vegan in 2022
3
Food trends 2022 that could dominate our plates: Vegan ...
4
Top 'Foreign' Foods That Are Actually Native to the ...
5
Foods to Avoid if You Want to Lose Weight
6
Expensive dishes for your Christmas table that are simple ...
7
Christmas finger food recipes that everyone will enjoy
8
Top 10 vegetarian recipes of the year were all ...
9
Weight loss: The Keto diet combined with intermittent fasting ...
10
While demonstrating her insane workout session, Olivia Culpo declares ...
More from: Noah Sheidlower and Radhika Marya
1
The definition of kosher food is expanding as a ...
Tags foods