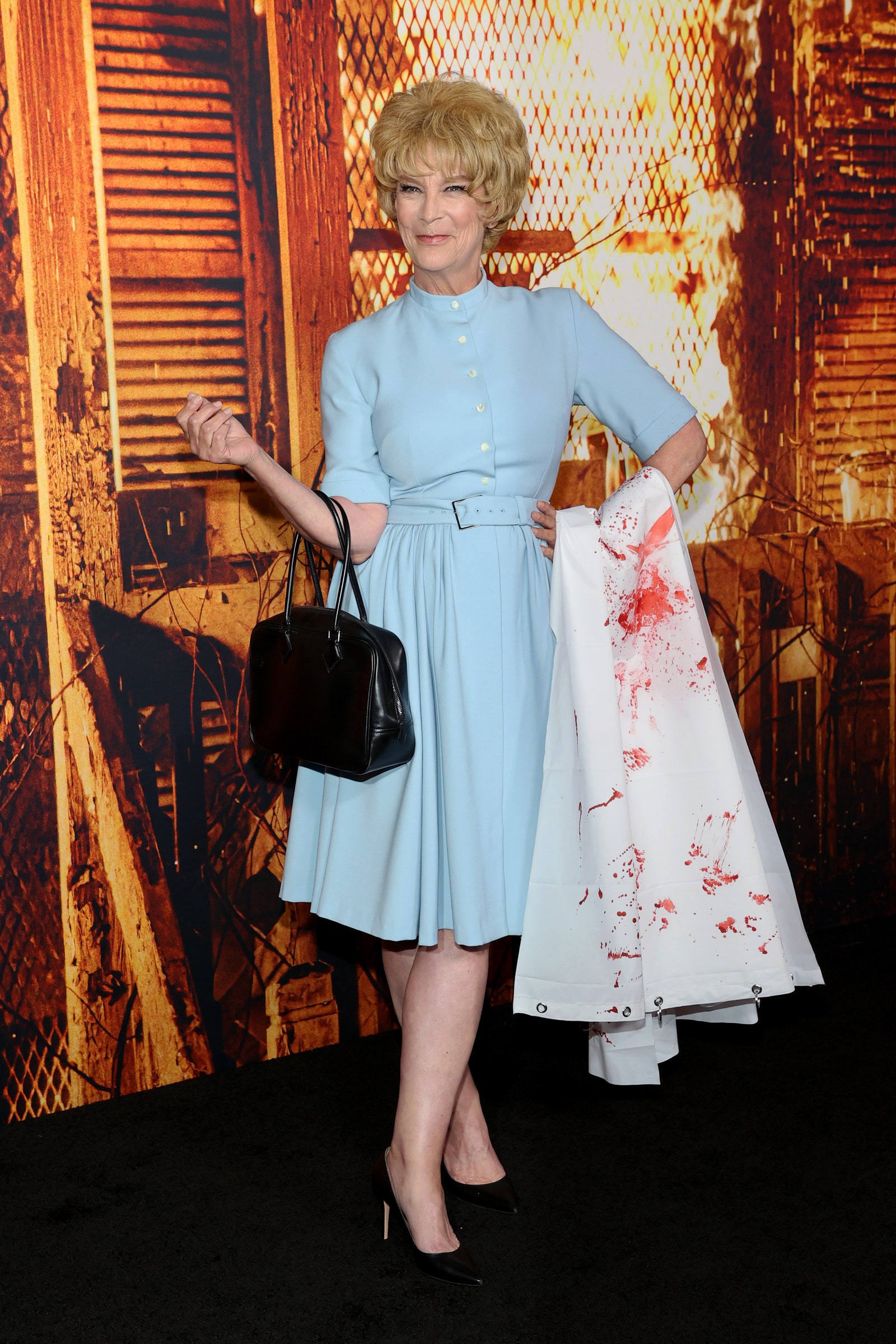 Photo: Getty Images
Jamie Lee Curtis—Hollywood’s reigning scream queen—is back as Laurie Strode in Halloween Kills, facing off against the psycho killer Michael Myers once again. In lieu of a typical red carpet, a costume party premiere was held for the film in Los Angeles yesterday. Judy Greer, who plays Curtis’s daughter Karen in the film, dressed up as Annie Hall; Kyle Richards, who also stars in the film as Haddonfield native Lindsey Wallace, suited up as a circus ringleader. But it was Curtis’s costume that stole the show.
Bringing high camp to the red carpet, Curtis paid homage to her mother Janet Leigh by dressing up as Leigh’s character in Alfred Hitchcock’s Psycho. You remember that iconic scene; The one where she’s stabbed to death in the shower by Norman Bates. (You may hear the scene as well). Curtis wore a bright blue, buttoned-up dress and a pert blonde bob. Just in case you missed the reference, she carried a blood-soaked shower curtain.
For a film as scary and gruesome as Halloween Kills, designed to scare the daylights out of the audience, Curtis nailed her equally-eerie red carpet approach. Plus, Leigh was a scream queen in her own right, so it’s only natural that Curtis carry on her legacy.
This story originally appeared on: Vogue - Author:CelebDailyPosts

Most Popular This Week
1
Feels Like A Steal: A Winter-Ready (and Sustainable) Puffer ...
2
This Earthy Label’s Pieces Blend In With Nature
3
Zoë Kravitz and Channing Tatum Are Starting to Dress ...
4
Angelina Is an Eternal Versace Girl
5
Telfar Outerwear Is Coming—And It’s Going to Be Everywhere
6
Katy Perry on Her Halloween Costume, New Campaign, and ...
7
Gigi Hadid’s Cozy Fall Look Is Filled With Buzzy ...
8
Need Last-Minute Halloween Inspiration? TikTok’s Got You Covered
9
With ‘Lalisa,’ Blackpink’s Brightest Star Steps Into the Spotlight
10
How Eve Brought Early 2000s Swagger to the Small ...
More from: CelebDailyPosts
1
Watch Debby Ryan’s Guide to Depuffing Skin Care and ...
2
From Fortnite to Fifa, online video game gamers have ...
3
Minecraft is now available on Xbox Game Pass for ...
4
Epic welcomes blockchain games but Fortnite NFTs are not ...