I Tried Out a Wearable Black Card Throughout Fashion Week

No wallet? No problem with the Prada Centurion bracelet. 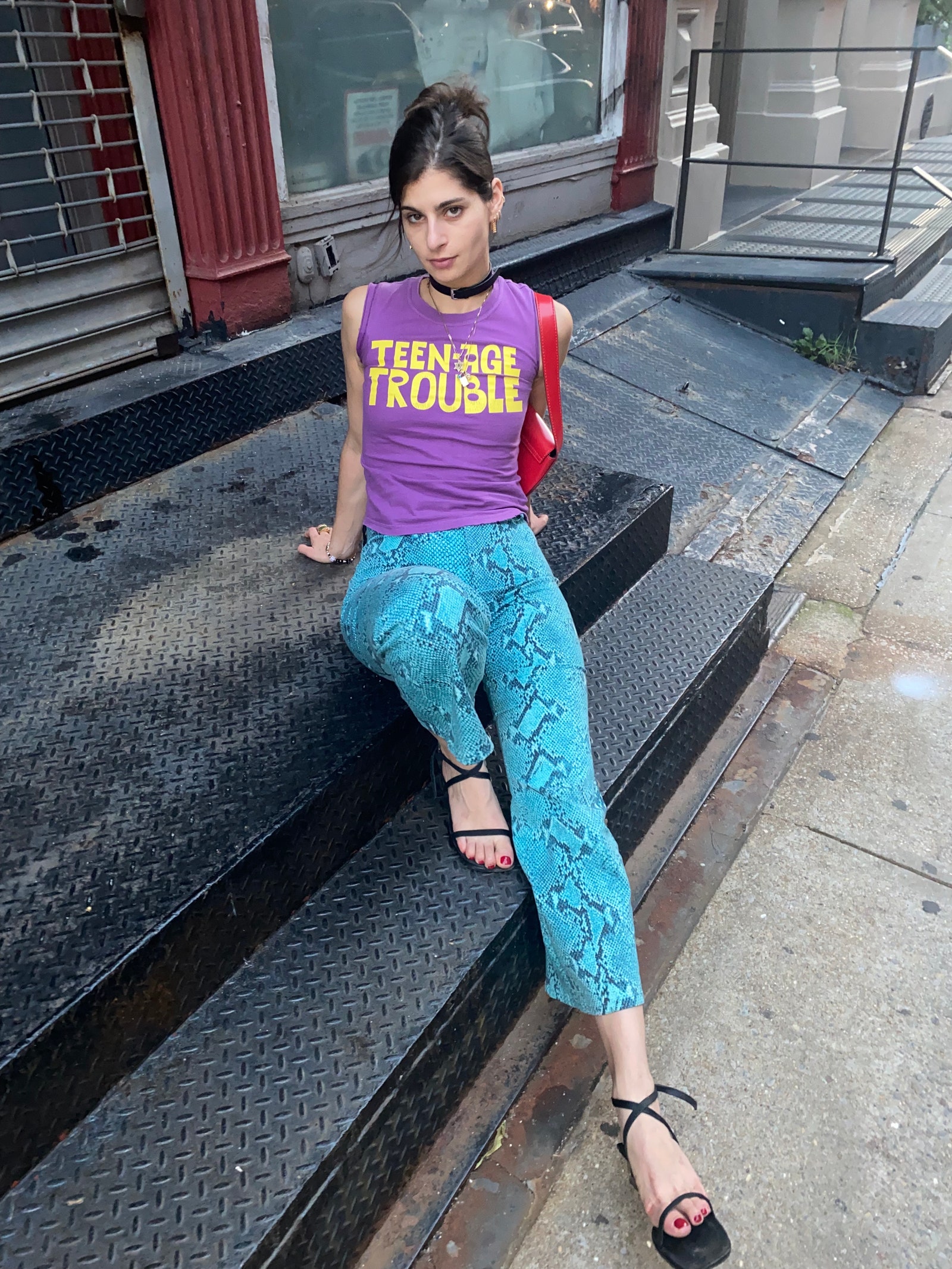 At the end of fashion week, I wore the Prada Centurion wearable around neck in lieu of my wrist! Photo: Courtesy of Liana Satenstein / @liana_ava
On the last day of Fashion Week, completely thirsty and late for a show, I ran to Dunkin’ Donuts and ordered a large iced tea for $2.49. I couldn’t be bothered to take out my debit card or even pull down my mask to access my digital wallet, so instead, I swiped my hand across the scanner. If you look closely, you’d see a sleek black leather band double-wrapped around my wrist: a Prada Centurion wearable. A tiny chip was implanted into the band, which was connected to my credit card allowing me to easily and swiftly maneuver through daily life like I was some sort of Gattaca babe.
I was the only person in the world who had this technology. Even when it’s released later this month, only a tiny percent of the world can get it. The Prada band is for Centurion cardholders only, meaning people who have a limitless American Express card— aka the iconic black card. I do not have a black card, but I quickly adjusted to the grandeur that having such exclusive technology brings. The band was linked directly to my own bank account but came with some of the perks of being a Centurion member. 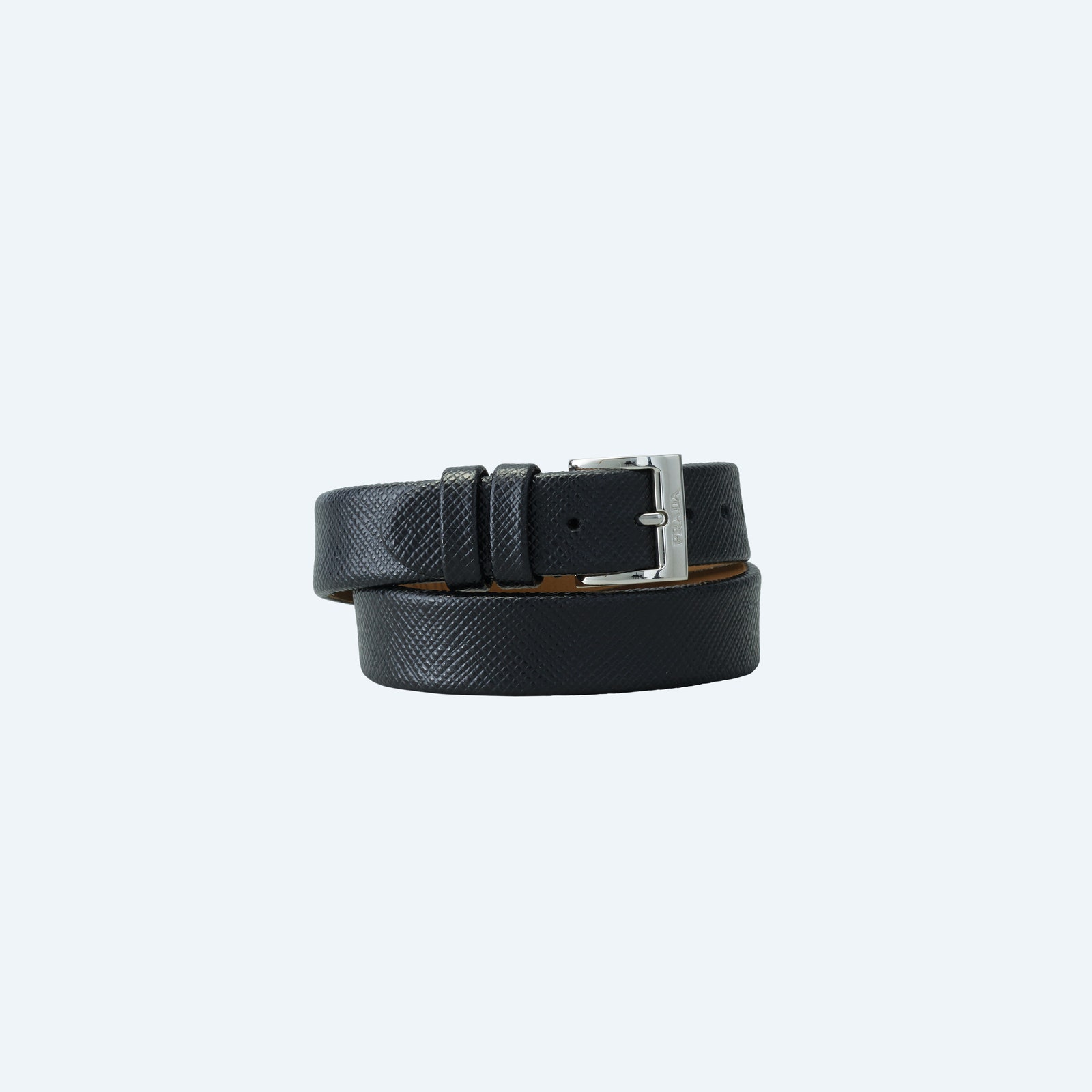 The Prada Centurion wearable. Photo: Courtesy of American Express
Having a bracelet takes away all the usual thought processes one has when buying something. A regular person has a wallet, and when they take out that wallet to buy something, they are conscious that they are participating in an act of spending. (And, often, they’re thinking about whether or not they can or should spend money on whatever is left on the counter). Even for those who use a digital wallet, there is still a step in the process of purchasing, whether that is pulling out the phone and using face recognition or typing a passcode. As for this bracelet? It’s the ultimate luxury. No thinking required. 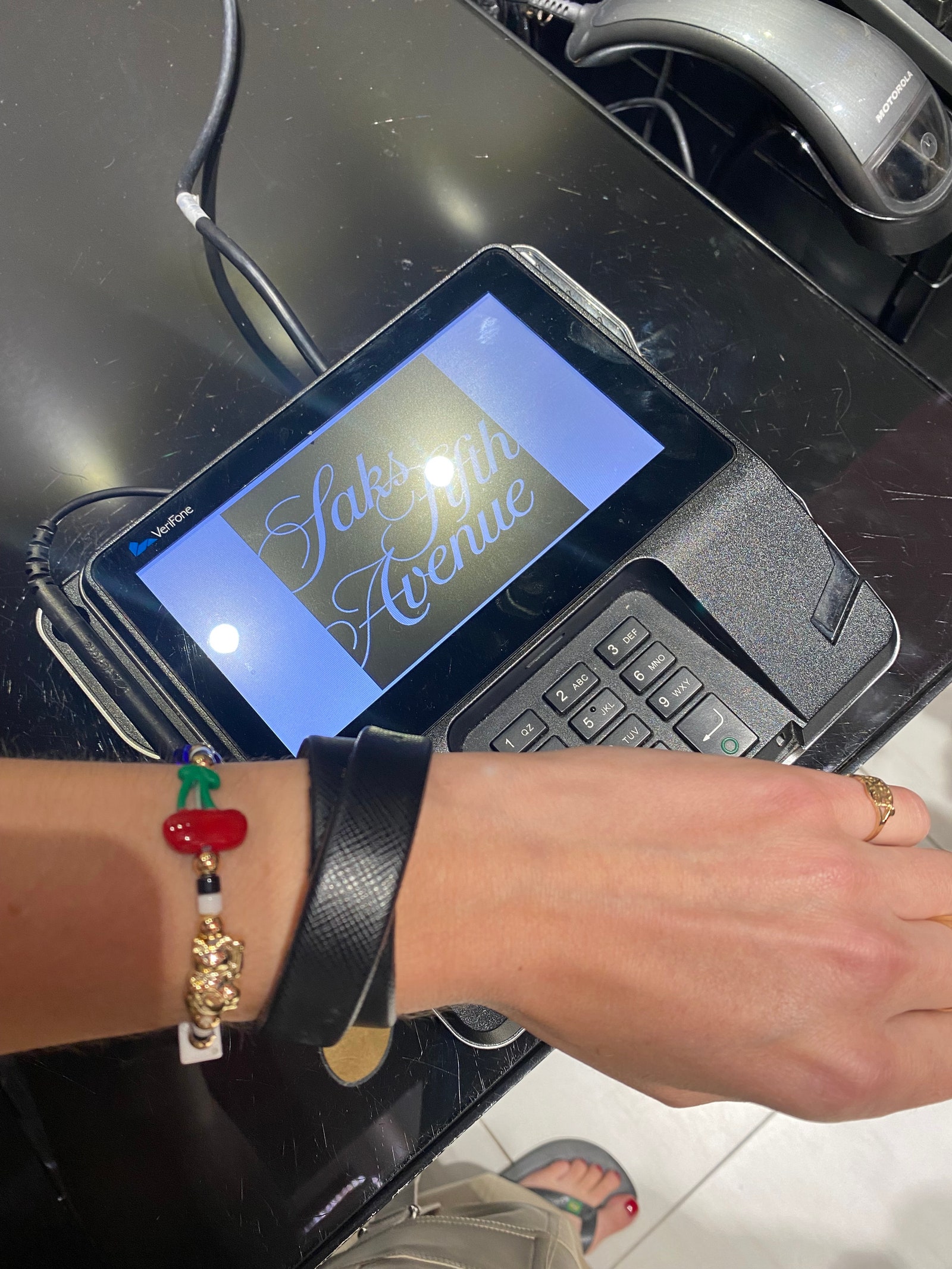 A flick of the wrist and I'm paid and out! Photo: Courtesy of Liana Satenstein / @liana_ava
With the band came the perks. Things just sort of...happened. For instance, when I made a reservation via Resy under my name for my friend’s birthday at Balthazar, bottomless flutes of Champagne kept appearing at our table. At a staycation at the Equinox Hotel, my room got magically upgraded. When I got my makeup done at Saks Fifth Avenue at the Armani counter, it was applied by an award-winning artist. It was an experience, which is what AmEx had in mind. “We thought about how we could lean more into the storytelling and the experiential,” Rafael Mason, the Head of U.S. Premium Products and Membership Rewards, told me over the phone. “We wanted to think beyond cards to push innovation. We wanted to reimagine contactless payment and wearable tech.” Stylistically, working with Prada made sense for AmEx: Both are known for their iconic black colors, for starters. 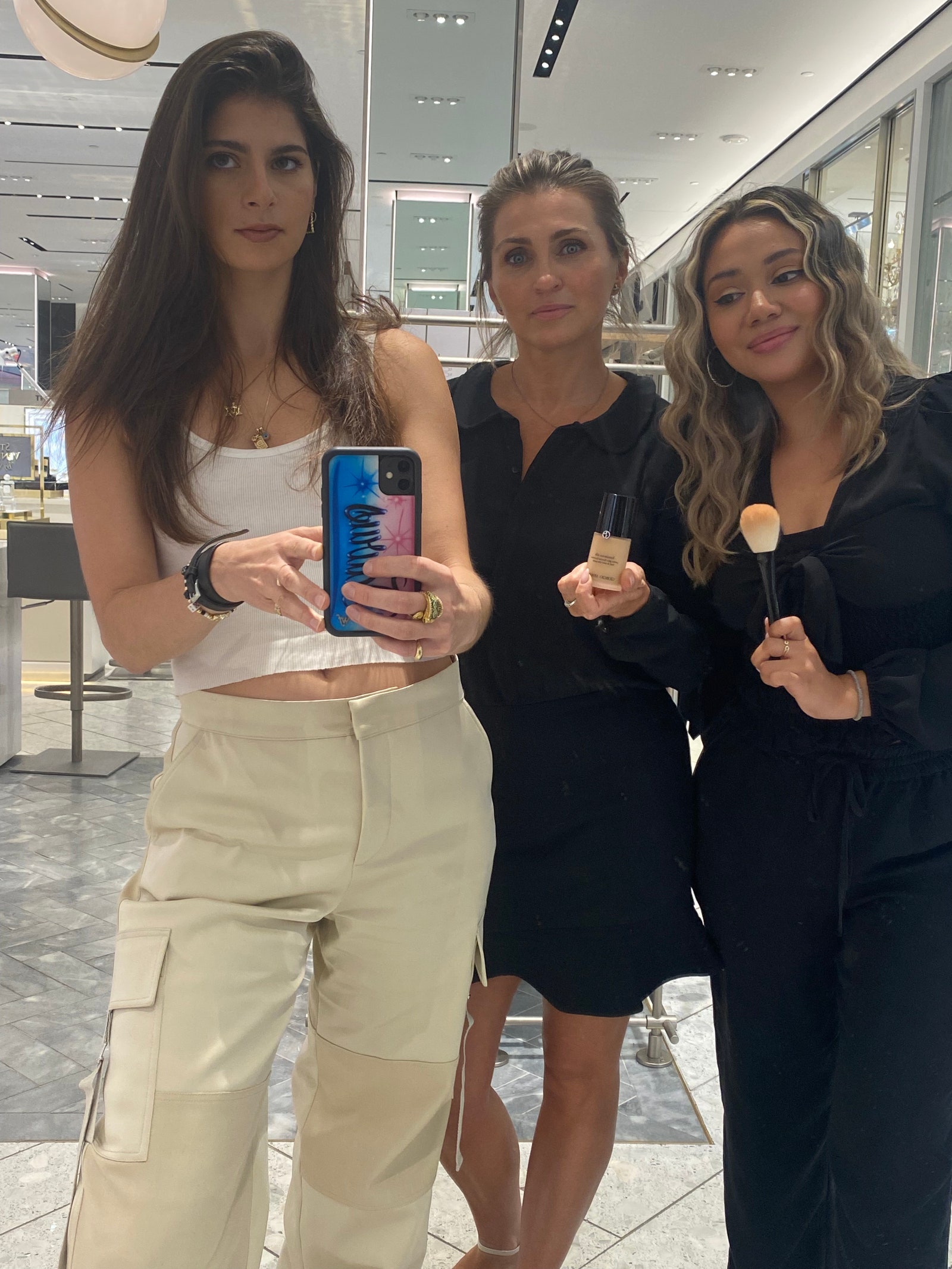 Here I am post-makeover with Kristina Khanoson and makeup artist Vanessa Hurtado from the Armani counter at Saks 5th Avenue. They were transfixed by the bracelet, too! Photo: Courtesy of Liana Satenstein / @liana_ava
Whenever I used the band to pay, there were reactions. After the Moschino show in Bryant Park, I had to run to the Apple store to get an emergency phone charger. The man who rang me up exclaimed, “I’ve never seen that before!” When I was at the Armani counter, the makeup artist and the manager filmed the process. The concept felt like the very early 2000s, when technological innovations were happening at a rapid pace: from PalmPilots, to big cell phones equipped with email, or even AmEx, who created the first metal card in 1999. The aesthetic of the band was also very noughties. I felt like Shakira, who wore plenty of leather bands during her noughties rocker-babe glory. But for the other members who will get a hold of the leather band? It’s not Shakira-minded, but rather a visual signifier to other Centurion holders that says: ’Tis me with my no-limits black card!
On the last day of Fashion Week, I was out with my colleagues for lunch, showing off my new black card band. They suggested I wear it around my neck, like a punk-rock choker. “It would look hot,” one said. I followed their advice, but before I did, I coolly paid for our lunch with my microchipped bracelet. I wanted to live a bit longer with the world at my fingertips—or rather, my wrist. 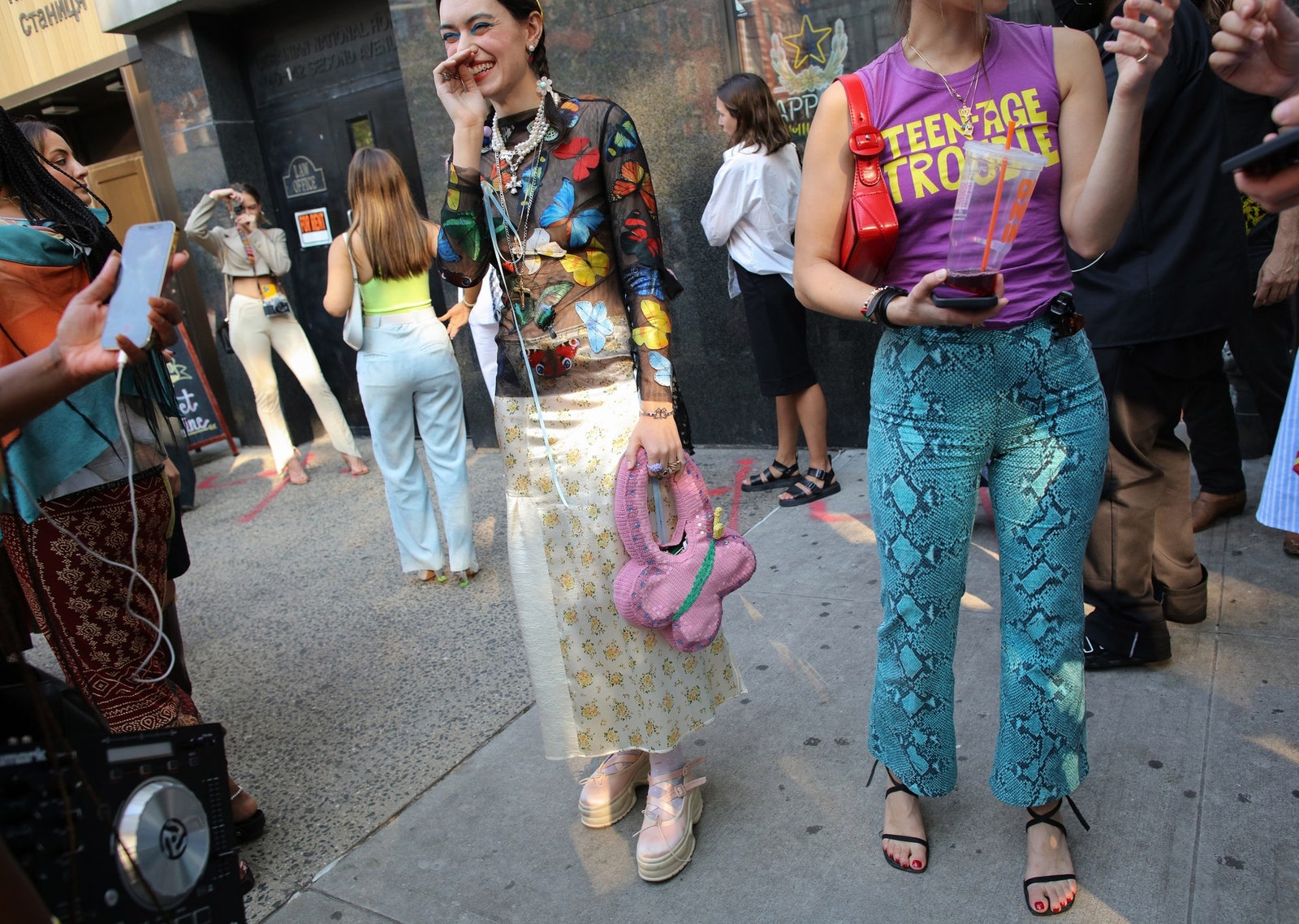 Caught out during fashion week with the discrete band outside of the Puppets & Puppets show. Photo: Phil Oh
This story originally appeared on: Vogue - Author:Liana Satenstein

Most Popular This Week
1
Feels Like A Steal: A Winter-Ready (and Sustainable) Puffer ...
2
This Earthy Label’s Pieces Blend In With Nature
3
Zoë Kravitz and Channing Tatum Are Starting to Dress ...
4
Angelina Is an Eternal Versace Girl
5
Telfar Outerwear Is Coming—And It’s Going to Be Everywhere
6
Katy Perry on Her Halloween Costume, New Campaign, and ...
7
Gigi Hadid’s Cozy Fall Look Is Filled With Buzzy ...
8
Need Last-Minute Halloween Inspiration? TikTok’s Got You Covered
9
With ‘Lalisa,’ Blackpink’s Brightest Star Steps Into the Spotlight
10
How Eve Brought Early 2000s Swagger to the Small ...
More from: Liana Satenstein
1
Should Bottega Veneta’s It Bags Be Your Newest Investment ...
2
How Model Turned CEO Lauren Chan Finds the Coolest ...
3
Dua Lipa Gives Bicep Bracelets the Celebrity Stamp of ...
4
Love’ Em or Hate’ Em—A Complete Guide to the ...