He wore an antique garnet necklace in honor of his late father. 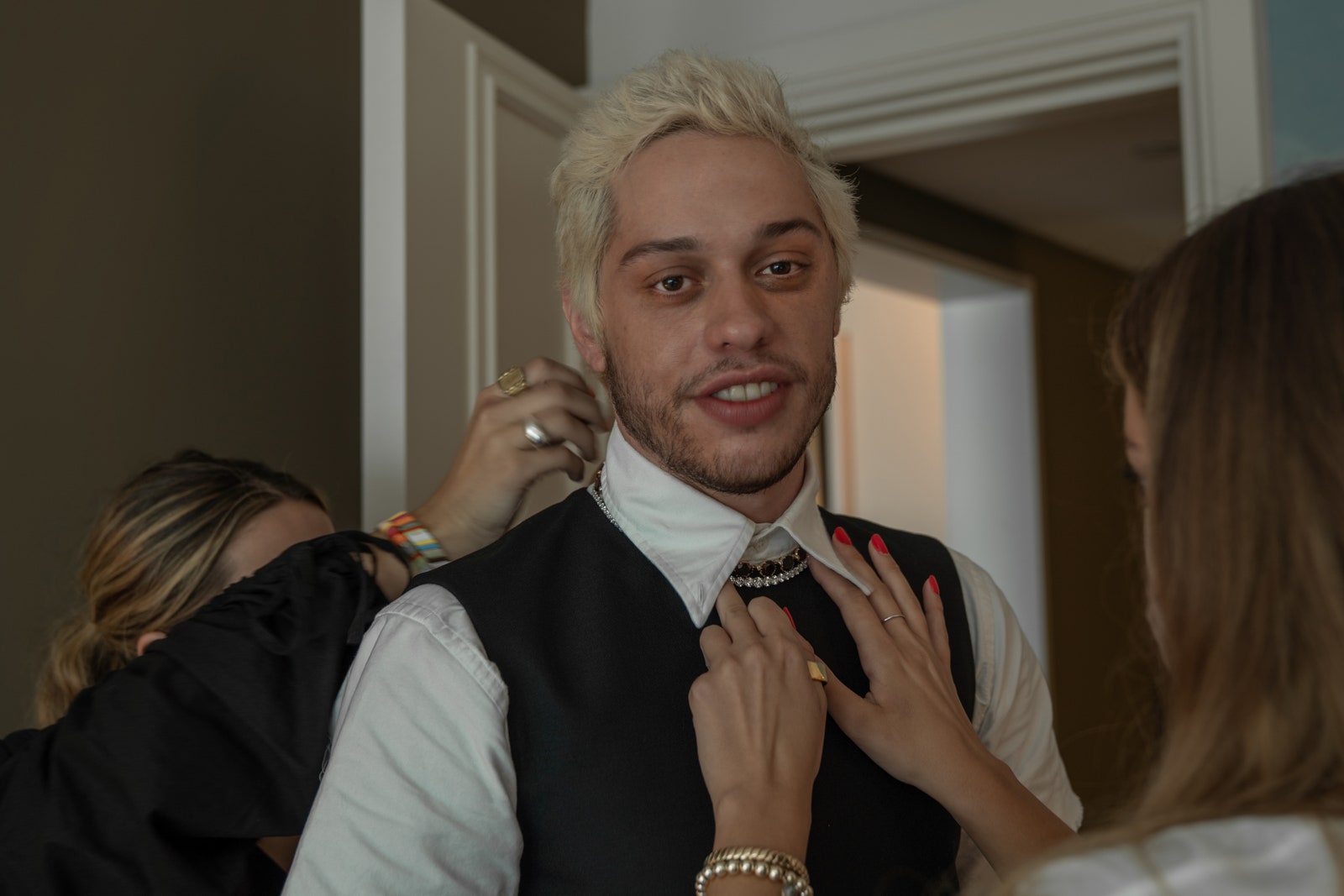 The final adjustments. Photo: Courtesy of Rosalind O'Connor
Pete Davidson cleans up nicely. That was evident at the Met gala 2021, when the fashion-loving bro wore a polished dress by Thom Browne, in lieu of the more expected suit. The comedian has been experimenting with fashion this past year, thanks to his stylist Britt Theodora. Just last week, she put him in a T-shirt by The Vampire’s Wife, a purple Bode knit cardigan, and bold print pants by Somdusca for his appearance on The Tonight Show Starring Jimmy Fallon, bringing his love for fashion to a more outré level. Theodora brought that same risk-taking philosophy to Davidson’s Thom Browne look. “We felt the dress represented Thom Browne’s identity as an American designer who is constantly breaking boundaries and norms,” Theodora tells Vogue. “The classic shape of the dress gave the perfect ode to American tailoring.” 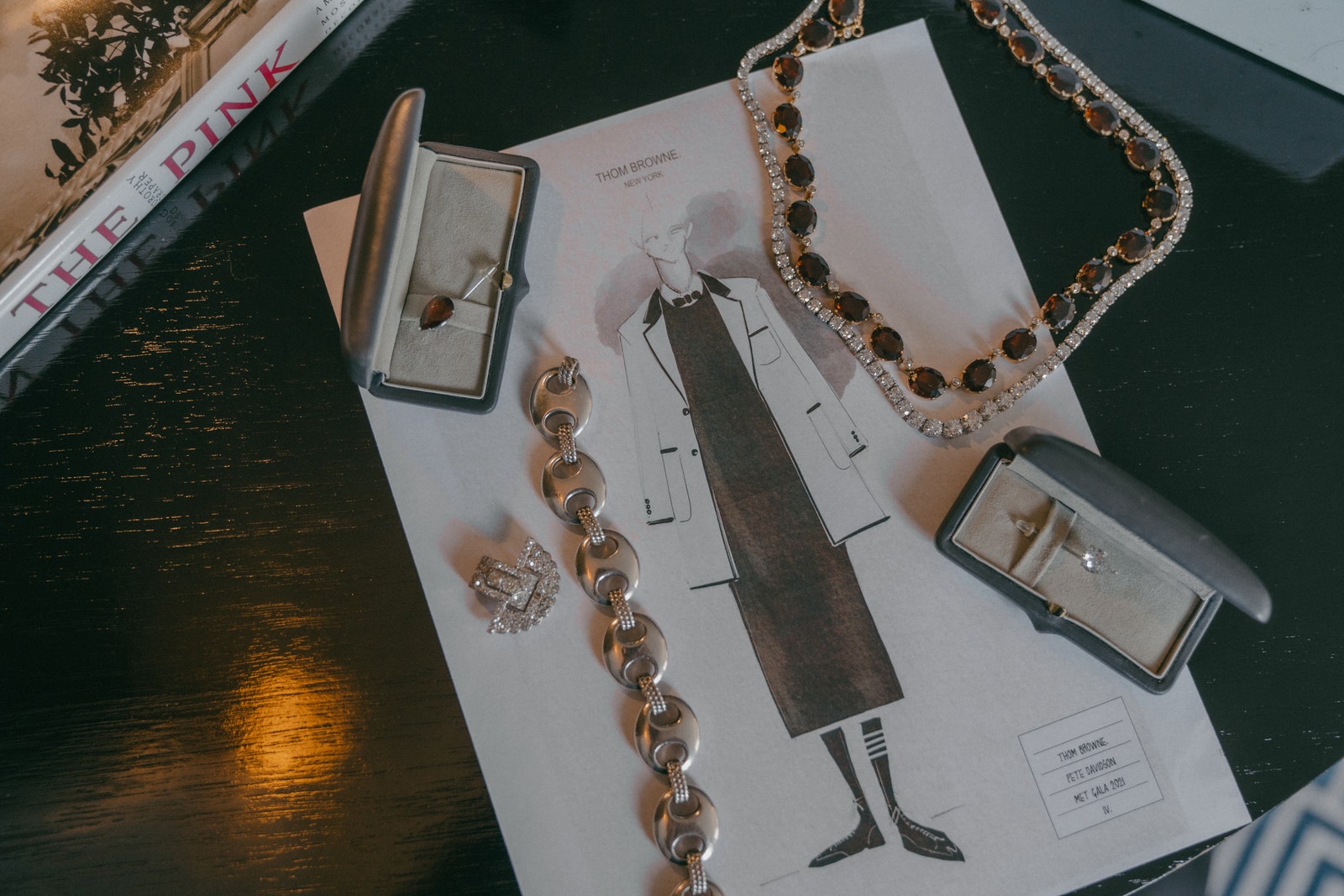 “Rebecca Selva from Fred Leighton had custom garnet and diamond teardrop lapel pins made for a suit jacket. I love unusual jewelry especially for an occasion as special as the Met. The floating teardrops were a representation of celebration and joy in this monumental moment for Pete,” says Davidson's stylist, Britt Theodora.  Photo: Courtesy of Rosalind O'Connor
But there was a deeper meaning to Davidson’s look as well. The Met gala was only two days after the 20th anniversary of the September 11, 2001 attacks, in which Davidson’s father, a firefighter, died. To honor him, Davidson wore garnets, his father’s birthstone, in the form of an antique necklace by Fred Leighton and custom lapel pins that appeared to be floating. “Pete’s father passed away on 9/11, and given that the Met this year was unusually in September, we wanted to pay a tribute to his dad,” says Theodora. “What made the necklace stand out was that they [the garnets] looked like black diamonds but when the light hit the necklace you can see the hints of red, which also feels very patriotic.”
Below, see more photos of Davidson getting ready for his first Met gala. 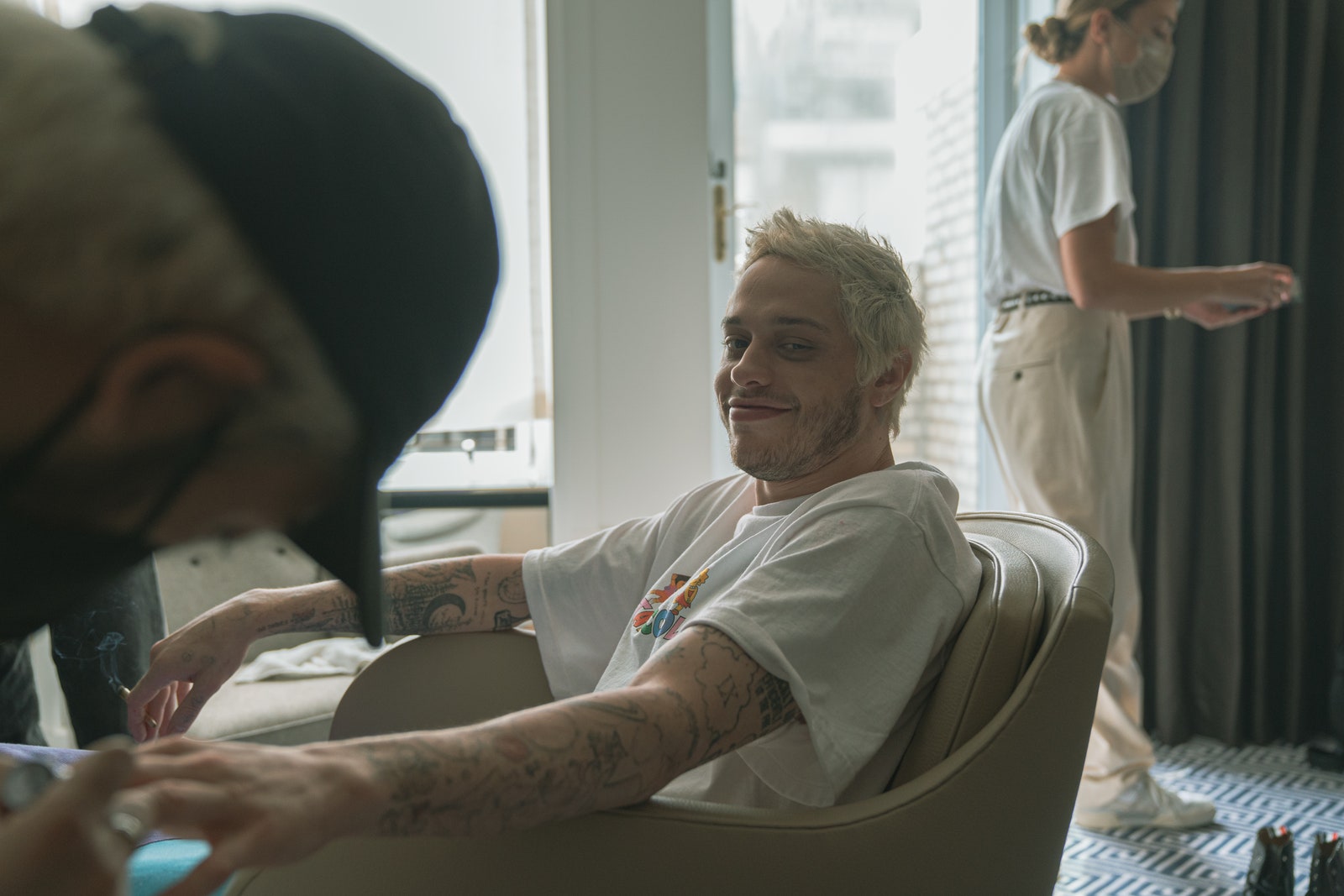 Tak Okamura paints Davidson's nails in an ombre design with black into silver. “We loved how it tied his accessories all together since Pete wore antique silver, black, and white diamonds on his wrist and fingers,” says Theodora. Davidson's look was further elevated thanks to his groomer, Kumi Craig. Photo: Courtesy of Rosalind O’Connor 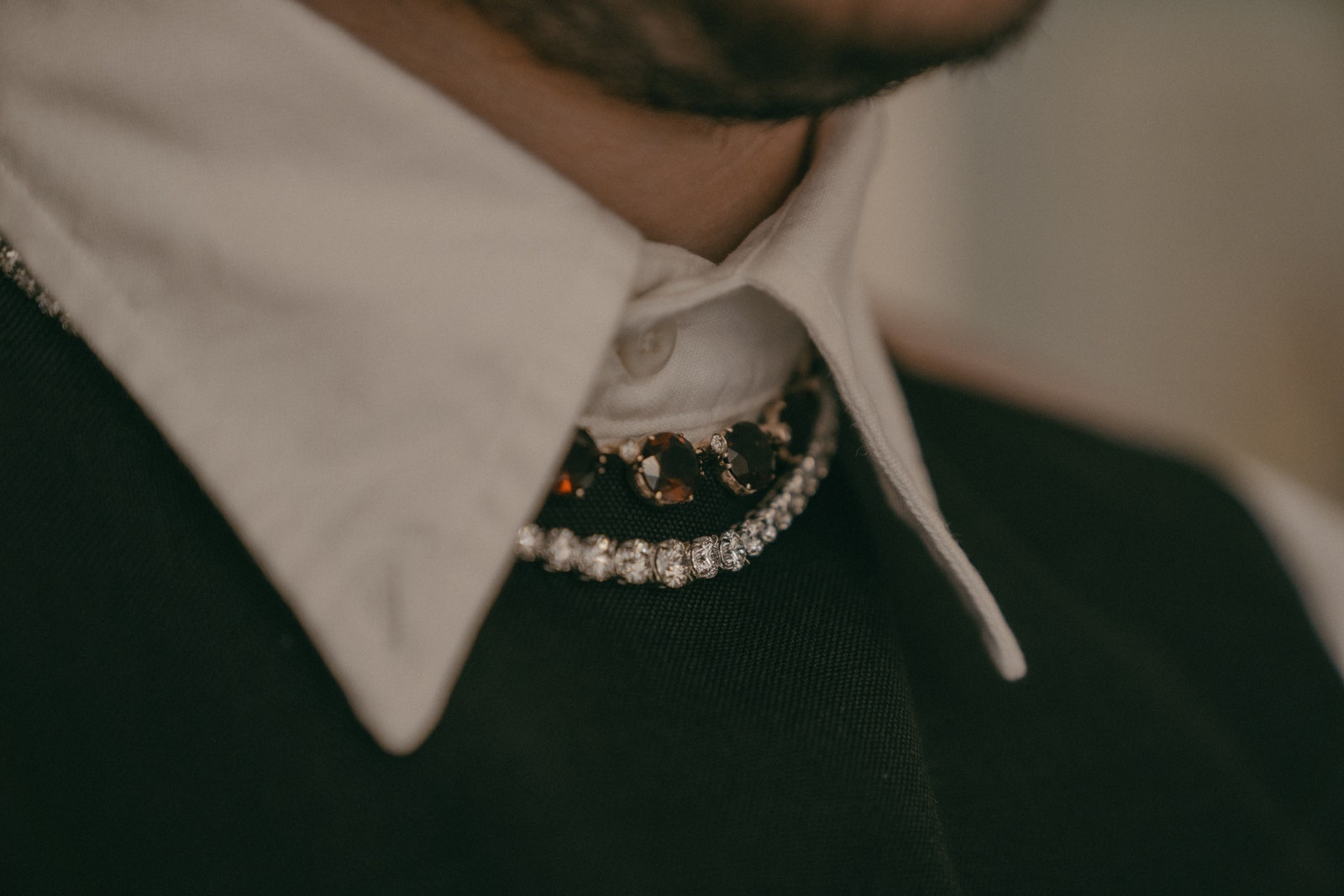 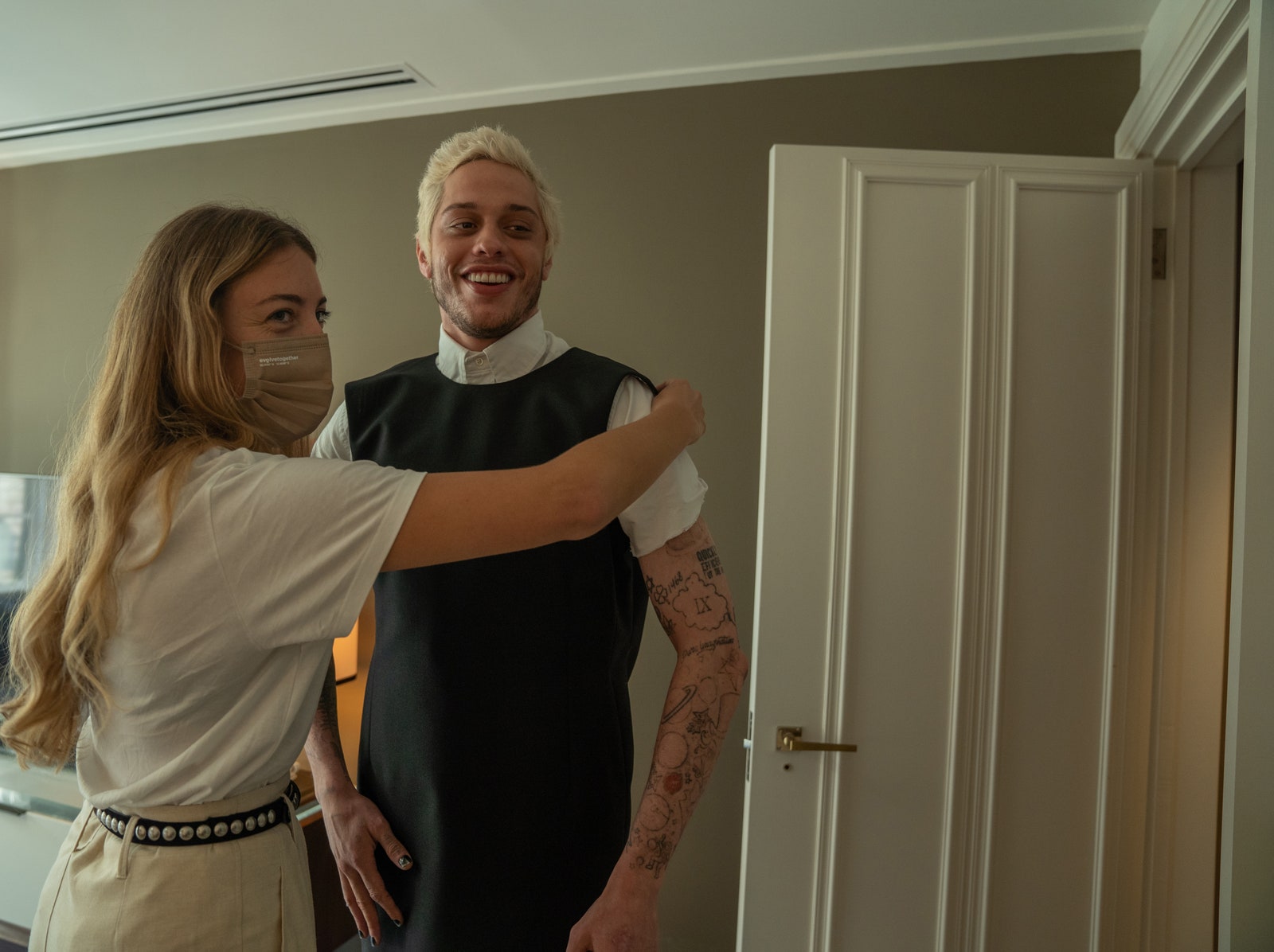 Theodora puts the final touches on Davidson. She wears an Evolvetogether mask, which Davidson later wore, as well. His came with a white stripe as an ode to Thom Browne. Photo: Courtesy of Rosalind O'Connor 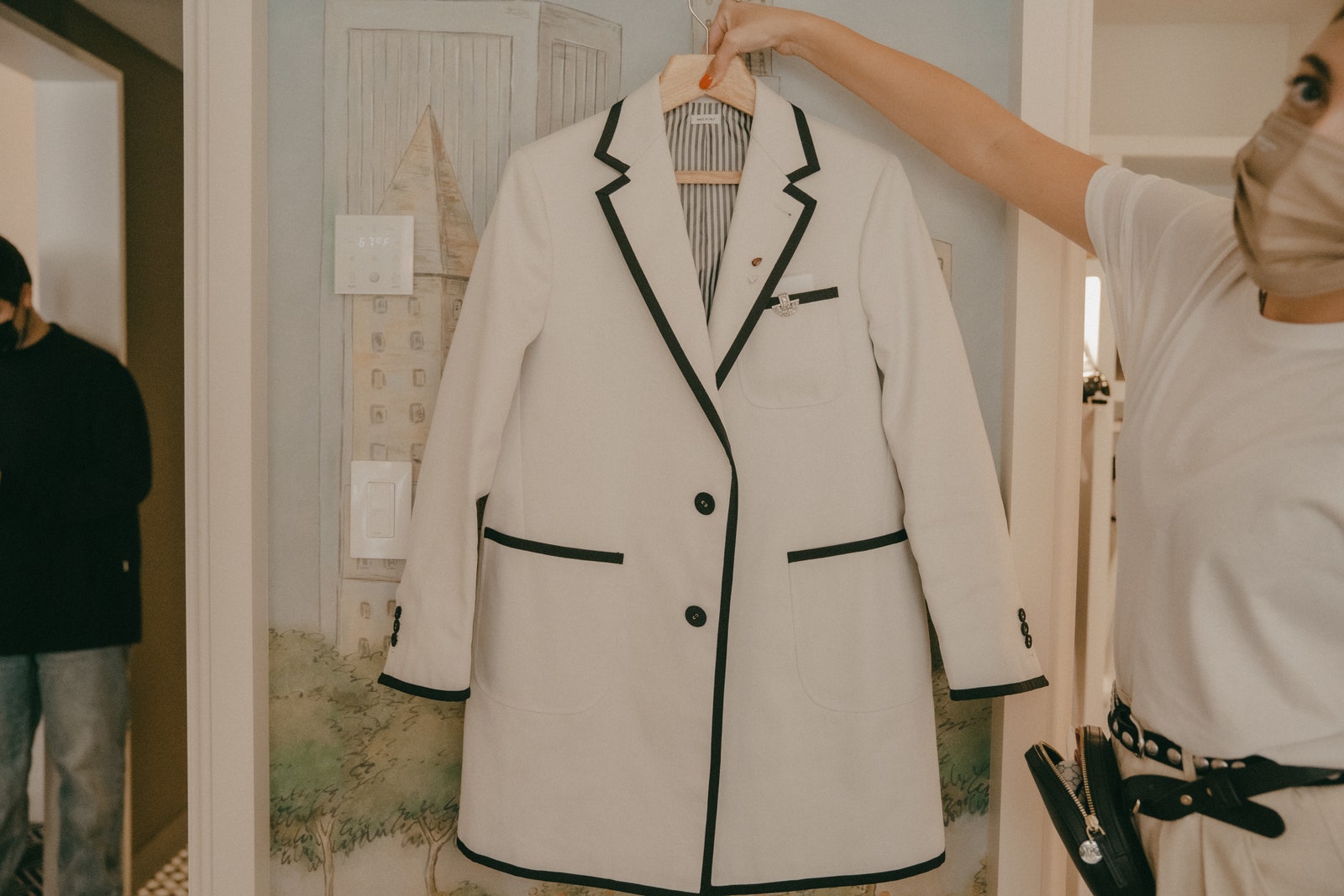 A polished suit jacket, or rather, a Thom Browne signature. Photo: Courtesy of Rosalind O’Connor 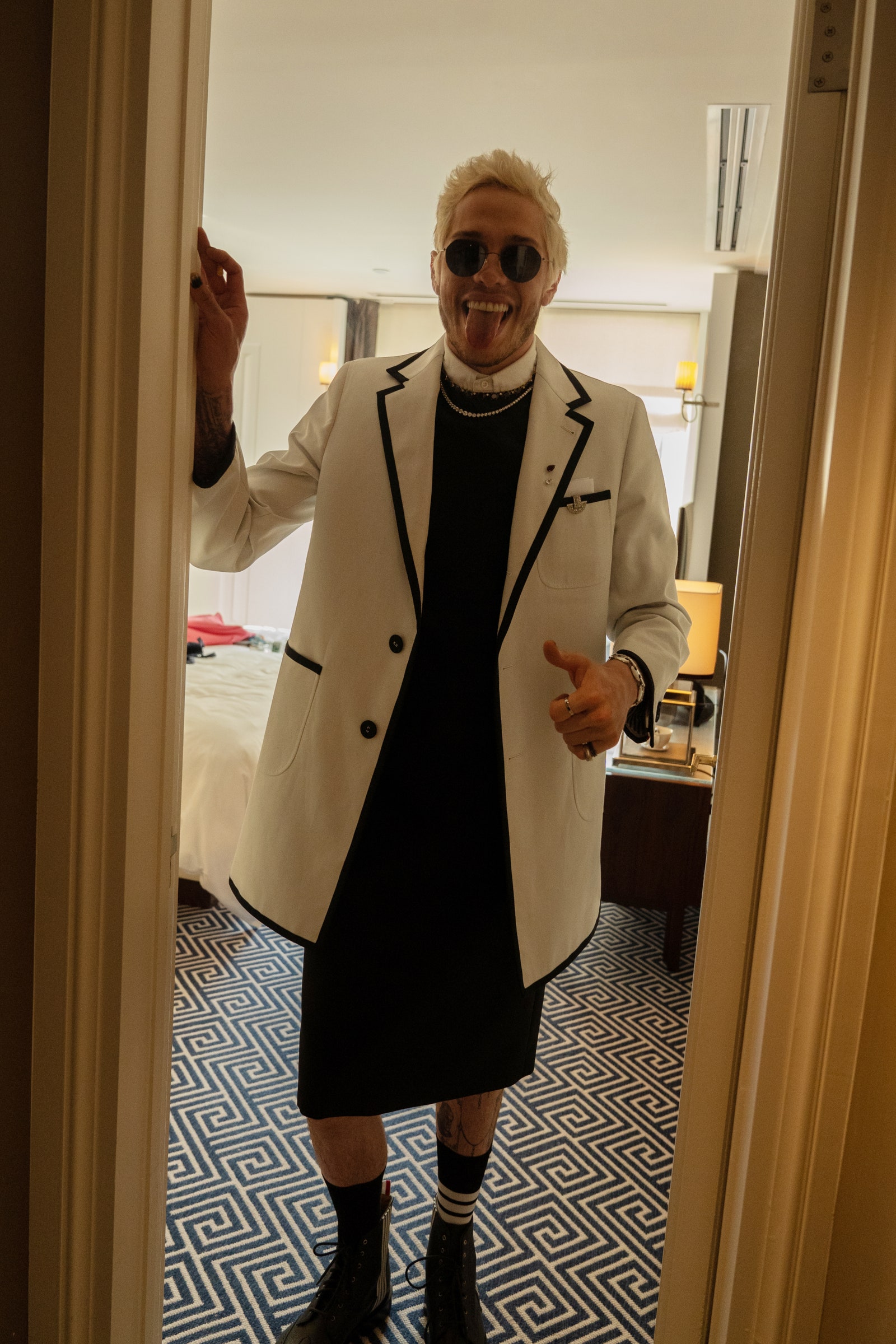 Davidson wears the final product along with a pair of custom sunglasses by Silhouette. Photo: Courtesy of Rosalind O'Connor
See All of the Celebrity Looks From the Met Gala 2021 Red Carpet:

Most Popular This Week
1
Feels Like A Steal: A Winter-Ready (and Sustainable) Puffer ...
2
This Earthy Label’s Pieces Blend In With Nature
3
Zoë Kravitz and Channing Tatum Are Starting to Dress ...
4
Angelina Is an Eternal Versace Girl
5
Telfar Outerwear Is Coming—And It’s Going to Be Everywhere
6
Katy Perry on Her Halloween Costume, New Campaign, and ...
7
Gigi Hadid’s Cozy Fall Look Is Filled With Buzzy ...
8
Need Last-Minute Halloween Inspiration? TikTok’s Got You Covered
9
With ‘Lalisa,’ Blackpink’s Brightest Star Steps Into the Spotlight
10
How Eve Brought Early 2000s Swagger to the Small ...
More from: Liana Satenstein
1
Should Bottega Veneta’s It Bags Be Your Newest Investment ...
2
How Model Turned CEO Lauren Chan Finds the Coolest ...
3
Dua Lipa Gives Bicep Bracelets the Celebrity Stamp of ...
4
Love’ Em or Hate’ Em—A Complete Guide to the ...
Filed under Met Gala 2021