Rockabilly retro looks good on her


Having recently switched her platinum hair for strawberry blonde, a look she unveiled while promoting her new film Spencer (in which she stars as Princess Diana), at the Venice Film Festival, Kristen Stewart experimented with a new hairstyle at 2021’s Met Gala. Channelling 1950s rockabilly style, the actor paired a retro ponytail—complete with a pin-up “victory roll” fringe—with pink brocade Chanel. (The nostalgic effect echoed the Old Hollywood beauty mood in evidence elsewhere on the red carpet at the Met.) 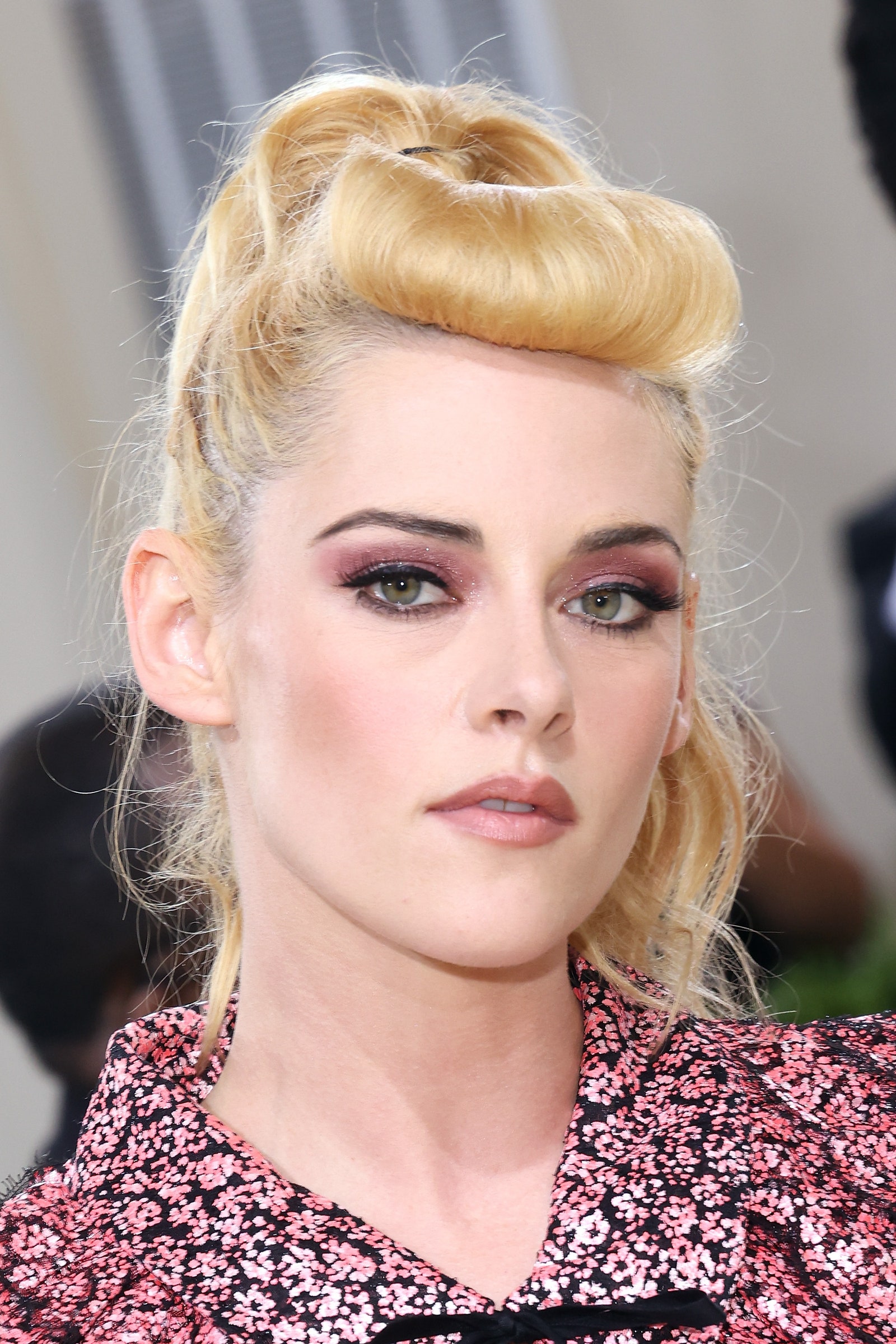 Taylor Hill
“Rosie the Riveter was a reference in my mind, as well as the impact and symbol of women’s independence,” says the hairstylist behind the look, Adir Abergel. “When I saw Kristen’s Chanel suit, I immediately looked at references of Betty Grable, Rita Hayworth, Bettie Page and those famous victory rolls that framed their faces for inspiration.” Using Virtue hair products, including the Volumizing Primer to create memory and hold in Stewart’s hair, Abergel created the faux bangs by creating a V-shape at the front of Stewart’s hairline, then rolling this section of hair into a classic pin-up-style fringe once the ponytail was complete. To finish the high pony, he secured it with some black string for a low-maintenance finish.

View on Instagram
Meanwhile, Jillian Dempsey, Stewart’s make-up artist, described the look as “all about lashes, a sharp arched brow, polished skin and chiseled cheeks,” which she achieved with a little help from Chanel’s roster of make-up products—including the Eyeshadow Quad 364 Candeur et Seduction, used to create a defined eye worthy of Grease.
Topped off with a defined brow and fluttery false eyelashes, the look is a far cry from Stewart’s usual grungy, androgynous vibe. But one thing is for sure: it’s certainly working for her.

Affiliate Disclaimer: All products featured on Vogue are independently selected by our editors. However, when you buy something through our retail links, we may earn an affiliate commission.
See All of the Celebrity Looks From the Met Gala 2021 Red Carpet:

Most Popular This Week
1
Eau de Jacquemus? The Beloved French Designer Is Reportedly ...
2
Anya Taylor-Joy’s New Role Will Surprise Absolutely No One
3
Lori Harvey’s New Skin-Care Line Is Inspired by Her ...
4
Why a Hot Water Bottle Is the Key to ...
5
Olivia Rodrigo Shows Off a Hair Transformation in Her ...
6
A Guide for Transitioning to Gray Hair, According to ...
7
Billie Eilish on Launching Her First Fragrance, and the ...
8
Watch Debby Ryan’s Guide to Depuffing Skin Care and ...
9
10 Cult-Favorite Fall Perfumes to Enhance Your Autumn
10
After Nearly Dying in Childbirth, I Wanted to Understand: ...
More from: Hannah Coates
1
11 Things to Know About Jackie Onassis’s Beauty Routine
2
Helen Mirren on Gray Hair, 12-Minute Workouts and Her ...
3
Do You Actually Need a Skin-Care Fridge?
4
How Ana de Armas Got Ready for the ‘No ...