A Taste of Broadway at the Met Gala Brings Back Singing, Dancing—And Theatrical Beauty

Let there be pastel-colored bobs and glitter!


In case you missed the flurry of shaky iPhone videos currently dominating social media, Justin Bieber performed a secret show at the Met gala last night. Fresh off his triumphant win at the VMAs, MTV’s artist of the year treated guests to four songs as the crowd screamed with delight. Bieber’s throwback rendition of his 2010 hit “Baby” (were we/was he ever so young?!) struck a chord, as did the sheer novelty of seeing a live performance again after 18 months of pandemic-related restrictions. But the Drew House designer wasn’t the only act to take the stage in the Metropolitan Museum of Art’s Temple of Dendur. As Mykal Kilgore belted out a Broadway medley to celebrate the lights coming back on the Great White Way, a company of Collina Strada–clad dancers wove in and out and on top of dinner guests’ tables, before Audra McDonald, the six-time Tony Award–winning actress, delivered a heart-stopping rendition of “Life Is a Cabaret.” Music and dancing are back!
“The performance was about the reopening of Broadway, but we wanted to make it more fashion,” said Kabuki, the iconic New York makeup artist who was on hand to prep the 25-plus dancers, directed by Raja Feather Kelly and Rachel Chavkin, with an artful application of glitter. Piggybacking off the strands of rhinestones Collina Strada designer Hillary Taymour incorporated into her custom pastel lace bodysuits, Kabuki painted large flecks of silver paillettes—“Always put the larger glitter on first so it sticks better, and then apply the smaller glitter to blend it out,” he advised—over a base of MAC Pro Longwear Nourishing Waterproof Foundation. Additional shimmer came from pastel accents of MAC eye shadow that Kabuki swept across lids in shades of purple, aqua, and green that were also woven into the costumes. “It’s the kind of environment where you are going to see things from afar, and then up close, so I wanted people to experience the makeup in that way, almost like in a nightclub,” he explained. 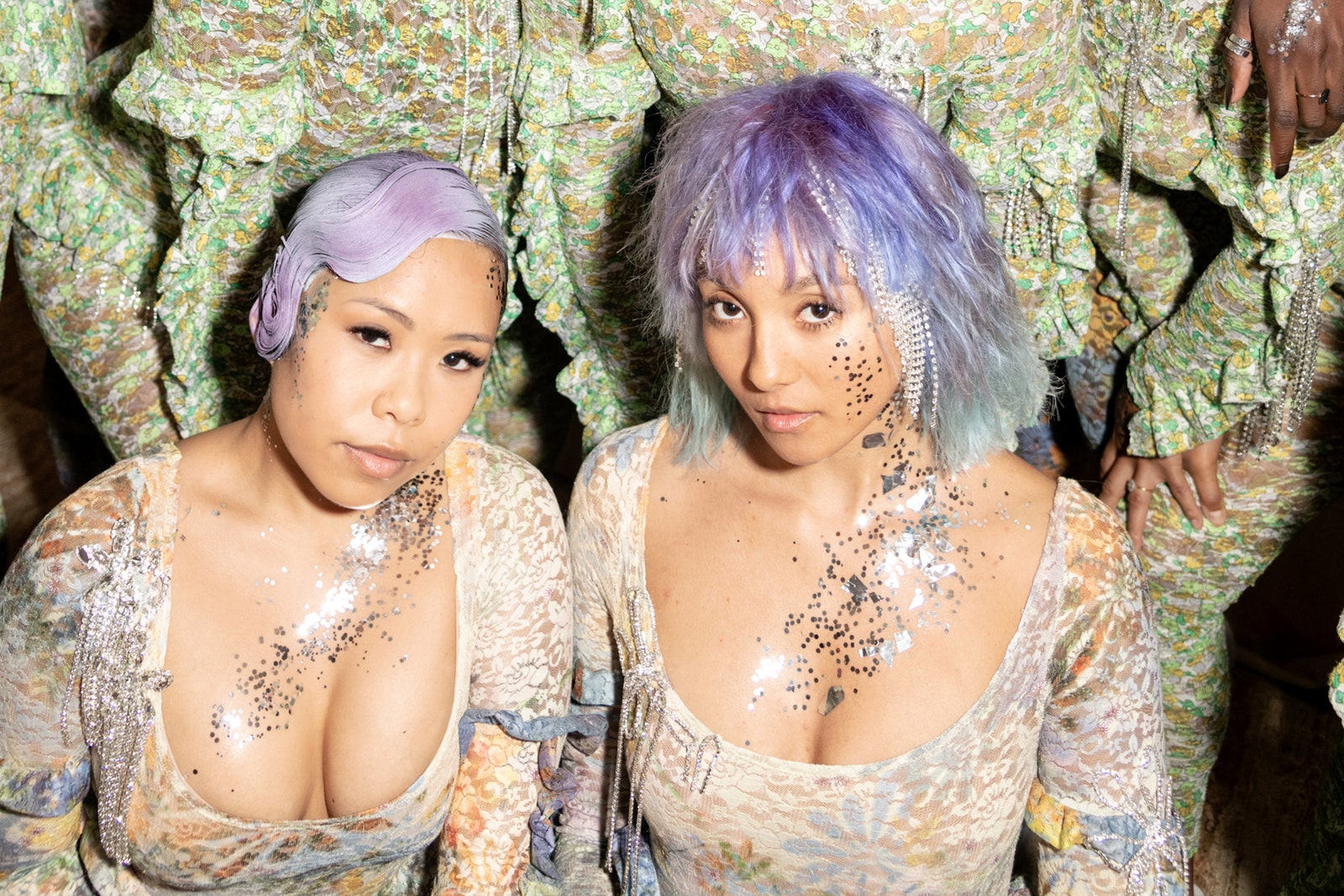 “Always put the larger glitter on first so it sticks better, and then apply the smaller glitter to blend it out,” makeup artist Kabuki advises of proper technique.
Photographed By Hunter Abrams
This story originally appeared on: Vogue - Author:Celia Ellenberg,Hunter Abrams

Most Popular This Week
1
Eau de Jacquemus? The Beloved French Designer Is Reportedly ...
2
Anya Taylor-Joy’s New Role Will Surprise Absolutely No One
3
Lori Harvey’s New Skin-Care Line Is Inspired by Her ...
4
Why a Hot Water Bottle Is the Key to ...
5
Olivia Rodrigo Shows Off a Hair Transformation in Her ...
6
A Guide for Transitioning to Gray Hair, According to ...
7
Billie Eilish on Launching Her First Fragrance, and the ...
8
Watch Debby Ryan’s Guide to Depuffing Skin Care and ...
9
10 Cult-Favorite Fall Perfumes to Enhance Your Autumn
10
After Nearly Dying in Childbirth, I Wanted to Understand: ...
More from: Celia Ellenberg,Hunter Abrams
1
A Taste of Broadway at the Met Gala Brings ...
Filed under Met Gala 2021