Lupita Nyong’o’s striking hair matched the sculptural nature of her Versace dress, while the makeup took cues from its blue hue.


Given that the springboard for Lupita Nyong'o's 2021 Met Gala beauty was a Versace dress defined by a confluence of beaded detailing and denim panels, an above-neck approach equal parts pretty and irreverent seems a natural match. Fortunately, longtime conspirators Vernon François (hair) and Nick Barose (makeup) were more than up to the task, each ensuring that, in this case, an “American” moment meant a supremely creative one.
“Brooklyn-born conceptual artist Lorna Simpson inspired the look,” said François of Nyong'o's molded mane, its transparent folds designed to echo the delicacy of tulle. “[Simpson's] take on texture is powerful, and I wanted to imitate the effortless wave and movement that she conveys in her work.” François relied on hair pieces, ample pins, and a spritz of Redken's Triple Pure 32 for maximum hold, along with an ardent communication of contrast, artistic freedom, and history. “Lupita is incredibly visionary and adventurous, not only does she have the most versatile kinky, coily, hair but the ability to wear and show the beauty of all hair textures,” he says. “I’ve always wanted to bring this technique to life within the Afro hair experience, and doing it for the Met Gala is mind-blowing.”
And while the striking hair may have matched the sculptural nature of the actor's Versace dress, Barose's makeup took its cues from its blue hue. The makeup artist used ten different shades of blue—shadows pulled from two separate Lancôme Hypnôse 5-Color Eyeshadow Palettes, Bleu Hypnotique and the soon-to-release Drama Denim—with bright accents here and there for even more dimension. A rim of black eyeliner and brickish lipstick completed the look. The trick is a ’90s one, in step with Barose’s overarching inspiration. 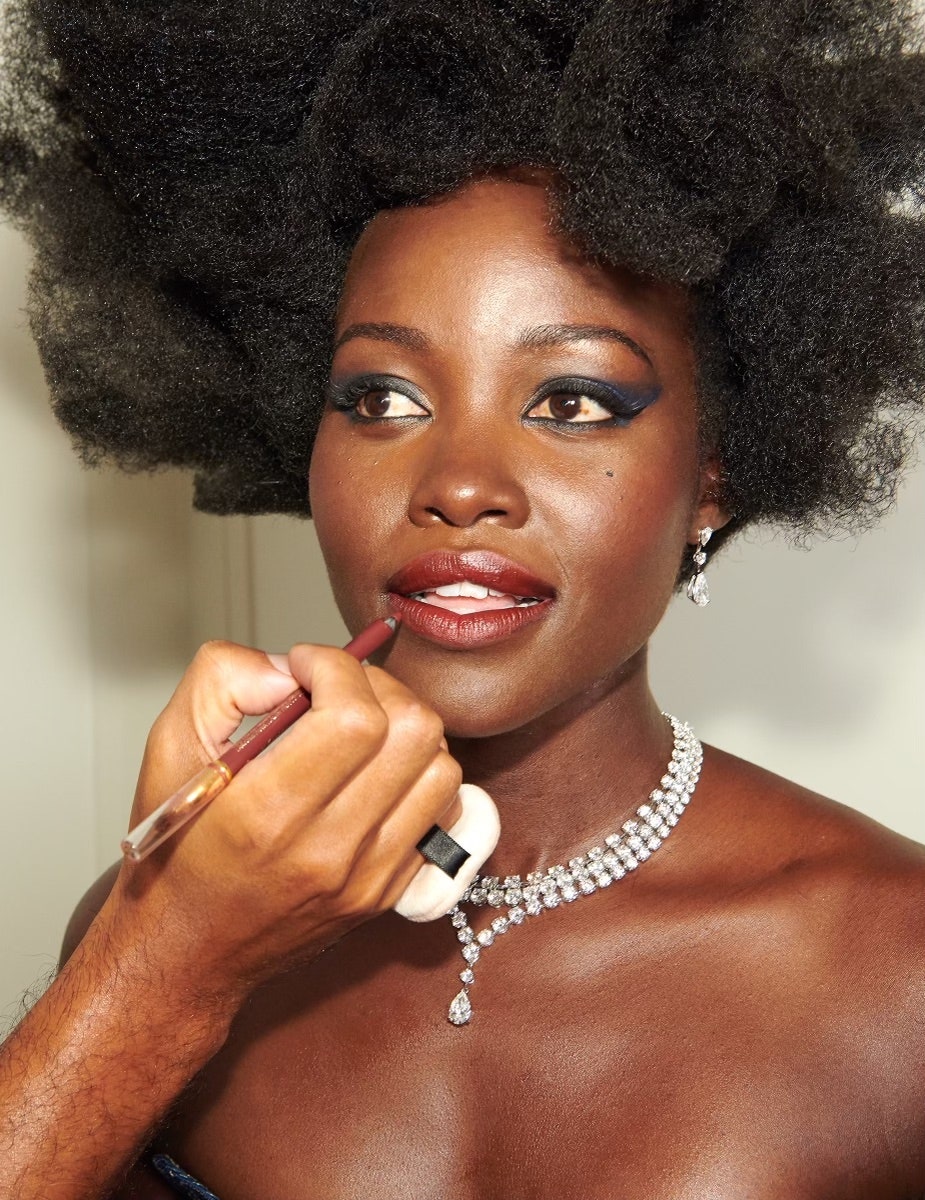 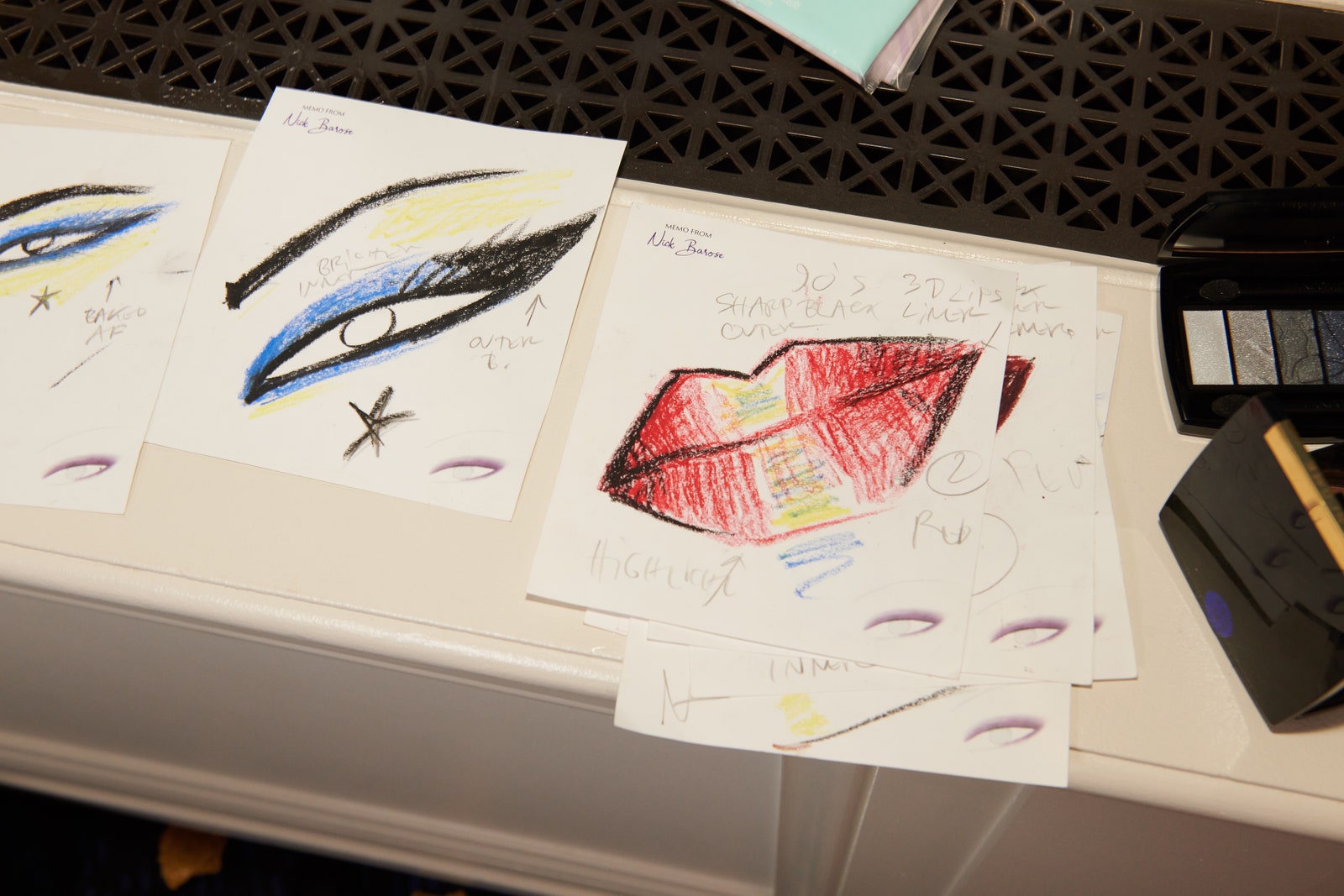 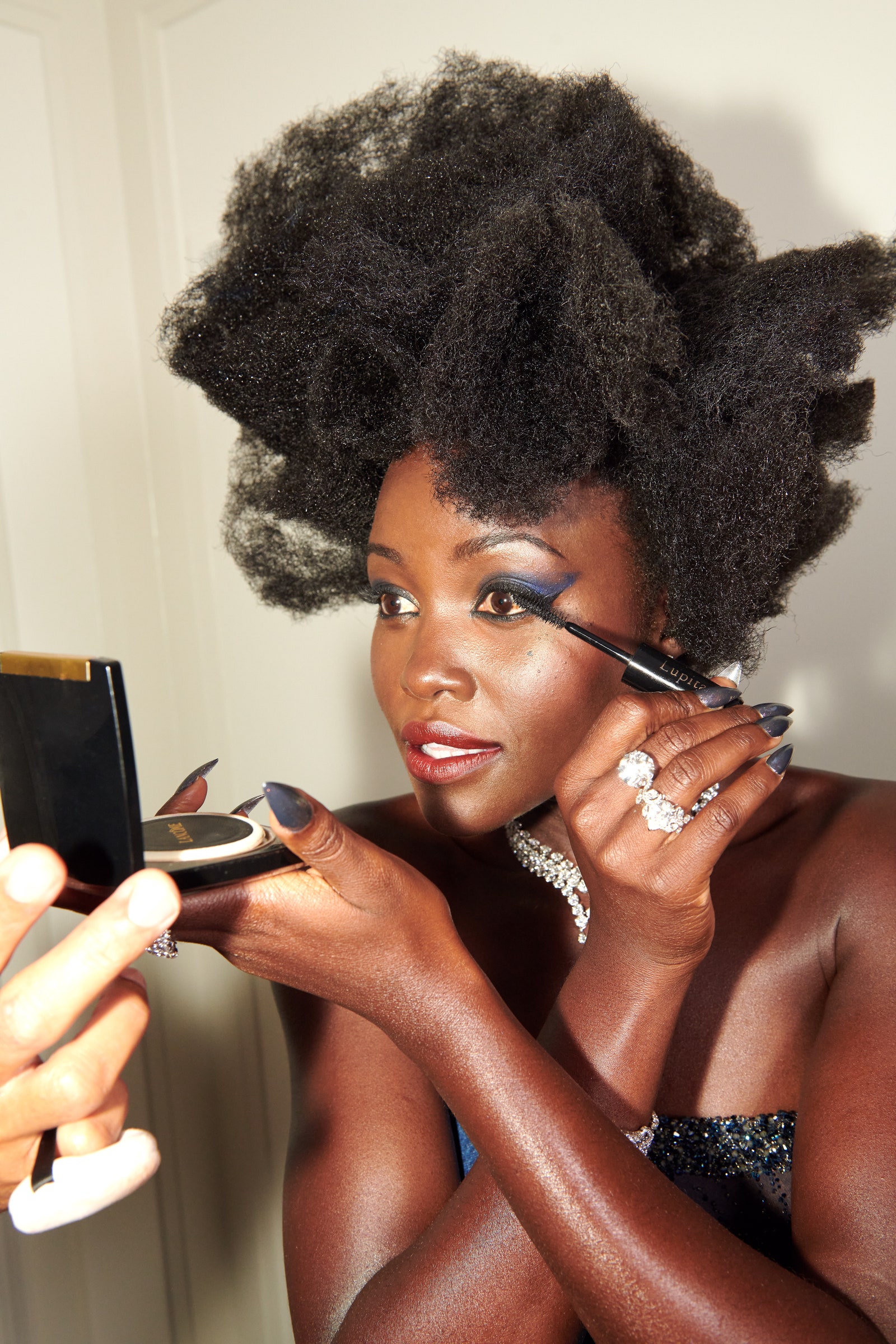 Photo: Courtesy of Lancôme
“We’ve been exchanging images of the denim dress, which is kind of my heyday,” explained Barose. “I was so inspired by the supermodels of the ’90s and Versace, so it’s something that’s second nature to me. But we didn’t want to do anything too on the nose. It's a different spin.” The makeup artist also cites Old Hollywood and Western films as references, the shared characteristic of all genres that of a femme fatale—a woman who is strong, powerful, glamorous, and fierce. “Mostly fierce,” said Barose. “That word is thrown around a lot, but a Versace moment is always fierce.”
See All of the Celebrity Looks From the Met Gala 2021 Red Carpet:

Most Popular This Week
1
Eau de Jacquemus? The Beloved French Designer Is Reportedly ...
2
Anya Taylor-Joy’s New Role Will Surprise Absolutely No One
3
Lori Harvey’s New Skin-Care Line Is Inspired by Her ...
4
Why a Hot Water Bottle Is the Key to ...
5
Olivia Rodrigo Shows Off a Hair Transformation in Her ...
6
A Guide for Transitioning to Gray Hair, According to ...
7
Billie Eilish on Launching Her First Fragrance, and the ...
8
Watch Debby Ryan’s Guide to Depuffing Skin Care and ...
9
10 Cult-Favorite Fall Perfumes to Enhance Your Autumn
10
After Nearly Dying in Childbirth, I Wanted to Understand: ...
More from: Calin Van Paris
1
Olivia Rodrigo Shows Off a Hair Transformation in Her ...
2
Zendaya Does Sci-Fi Beauty at a ‘Dune’ Screening in ...
3
Demi Moore and Scout Willis Have a Twinning Hair ...
4
Emma Corrin’s High-Drama Manicure Steals the Spotlight at the ...
Filed under Lupita Nyong'o