No, that's not an exaggeration.


Hot off her appearance at the VMAs, Simone Biles just made her Met ball debut on the Met gala 2021 red carpet. And it was quite the entrance.
The gymnast's silver train was so massive that it had to be carried up the steps by a team of six men (yes, really). Biles described her AREA x Athleta dress, which consists of a black bodysuit with star details and the aforementioned massive train, as having “flexibility from mat to Met.” She also revealed that it weighs a whopping 88 pounds.
The look was a custom collaboration between Area and Athleta, inspired by the Olympian's record-breaking career. Glamour is told the design was meant to capture “the intersection where performance, strength, and beauty meet.” In honor of Biles and her look at the Met gala, Athleta is also donating $50,000 to The Power of She Fund.
Take in the dress, below: 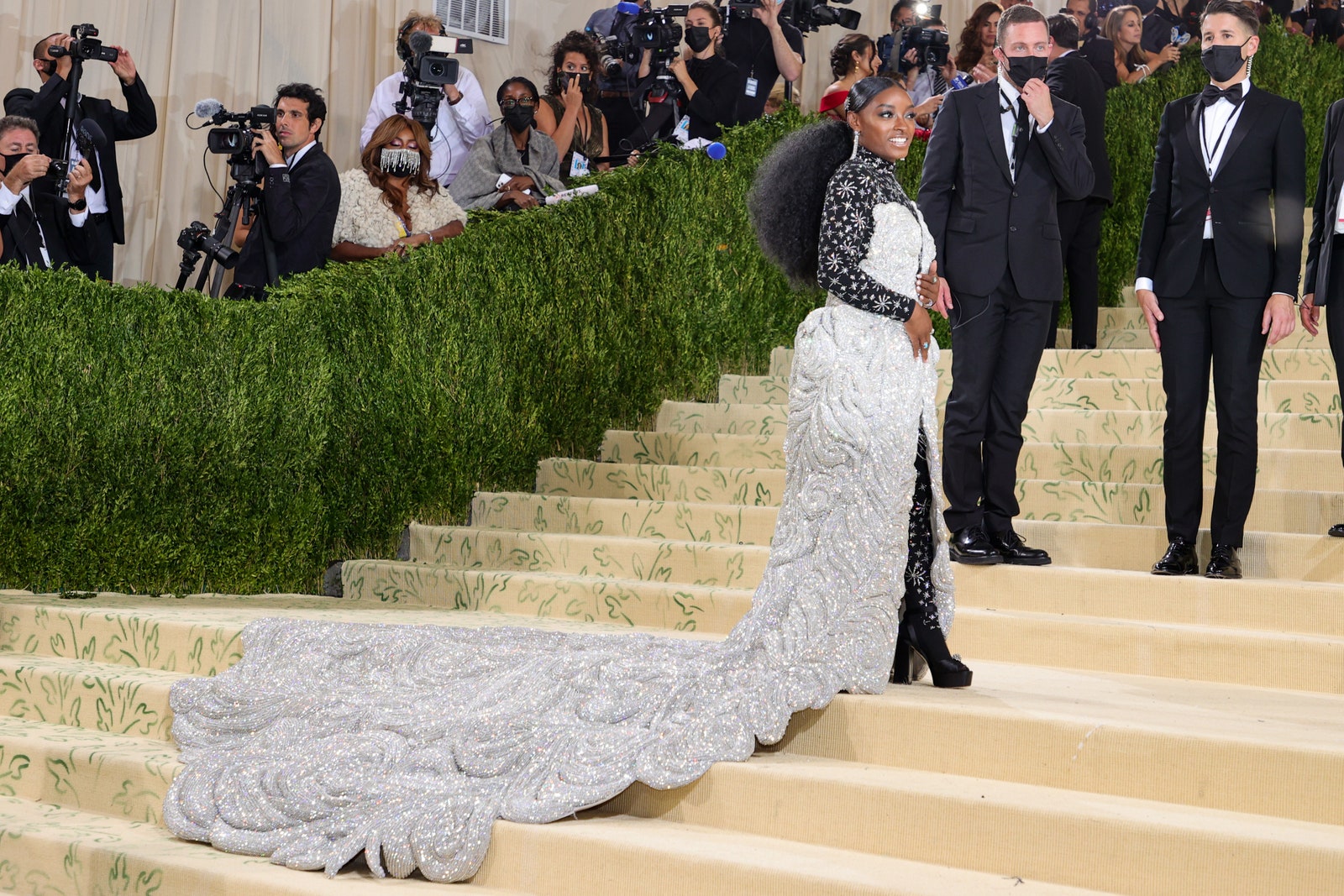 View on Twitter
While the dress and shoes—styled by Leslie Fremar—were the stars of the show, Biles' voluminous ponytail and silver smoky eye were equally stunning. Both the hair and makeup looks were inspired by Biles's dress and her inner power.
“I wanted Simone’s hair to represent African American women with its texture and sleekness," her hairstylist Nigella Miller tells Glamour. "The thickness and texture are the best of both worlds and really capture the epitome of African American hair. The stars represent power and beauty on a natural level, just like Simone does.”
When it came to her makeup, it was all about the glamour. “We gave Simone an iridescent, taupe smokey eye to compliment the silver detailing on her dress," says her makeup artist Autumn Moultrie. "We kept it light to be sure the dress and her hair are the focal point, and she’s wearing very little foundation because her skin is flawless.”
The Met gala 2021 was the first major events Simone Biles has attended since the Tokyo Olympics, in which she withdrew from a few categories after experiencing the “twisties.” The 24-year-old still won a bronze and silver medal at the Games, though, and she opened up about her experience on Instagram.
“Definitely not the way I planned the olympics going but I wouldn’t change anything for the world,” she wrote. “I’m proud of myself and the career I’ve had thus far. this olympics doesn’t erase the past accomplishments I’ve achieved nor does it define who I am as an athlete. I’ve pushed through so much the past couple years, the word quitter is not in my vocabulary. for some of you that may be how you define me but keep talking because I can’t hear you over my 7 olympic medals which tied me for the most decorated gymnast EVER as well as most decorated American gymnast.”

Most Popular This Week
1
Interior Design Powerhouse Kathy Kuo Is All About the ...
2
Megan Thee Stallion Is Making Hot Girl Fall Happen ...
3
Grece Ghanem Is a Fashion Influencer With Actual Influence
4
The Evolution of Cynthia ‘SimplyCyn’ Andrew
5
Bystanders Didn’t Intervene as a Woman Was Raped. In ...
6
Kristen Stewart Reacts to Fans Wanting Her to Play ...
7
It’s Never Too Late for a Shag Haircut
8
Billie Eilish Just Announced Her First Perfume
9
Salma Hayek Made a Rare Red-Carpet Appearance With Her ...
10
Selena Gomez Now Has a Sharp Bob Haircut
More from: Condé Nast
1
Welcome to the 2021 Hair Loss Club
2
For Yara Shahidi, Style Right Now Is All About ...
3
The ‘Insecure’ Cast Did One Last Red Carpet Together, ...
4
Interior Design Powerhouse Kathy Kuo Is All About the ...
Filed under simone biles ,  met gala ,  red carpet